t’s seven a.m. on a steamy July morning in Miami, Florida. While his neighbors are sleeping in, entrepreneur David Hoffmann of David’s Been Here is already awake and preparing to head to his office. Hoffmann, a 34-year-old travel content creator, has made a living filming and sharing his adventures around the world since 2008. 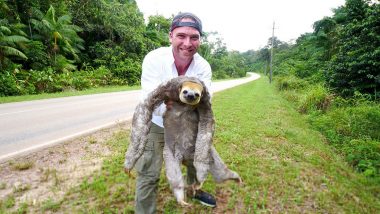 It’s seven a.m. on a steamy July morning in Miami, Florida. While his neighbors are sleeping in, entrepreneur David Hoffmann of David’s Been Here is already awake and preparing to head to his office. Hoffmann, a 34-year-old travel content creator, has made a living filming and sharing his adventures around the world since 2008. Hoffmann’s work caters to foodies and travel enthusiasts who like to learn about history, culture, and exotic dishes in far-flung destinations across the globe.

On this particular morning, Hoffmann is releasing a video he filmed during the trip he took through the south Asian country of Bhutan in March of 2020. Hoffmann spent eight days documenting the nation’s notable cities, Buddhist culture, and unique cuisine. The trip was a challenge for him, as it coincided with the country’s first case of COVID-19, forcing him and the tourism board he was working with to rewrite his itinerary on the fly. Later in the trip, Hoffmann cut his adventures short by four days to ensure that he could get home before national borders around the world closed to foreigners.

“It was a crazy situation,” Hoffmann says. “To get home, I would have to pass through India and Qatar, and India announced it was closing its borders to foreigners on day eight of my trip. I have a wife and two kids at home, so I couldn’t risk being stuck in Bhutan for months. It was super stressful, but I made it out okay, thank God.”

As of July of 2020, the multi-country trip was the most recent for Hoffmann, who usually travels once per month for at least two weeks at a time. It’s part of a plan that first began to germinate in his mind back in 2003, after the then-18-year-old took a solo trip to Umbria, Italy to visit his mother’s family.

“I stayed in Gubbio with my mother’s family for a week,” Hoffmann says with a laugh. “I was lost in translation the entire time, but we connected through food. The idea of using food as a tool to connect with people of different backgrounds is so powerful to me. It made me realize I wanted travel to be a big part of my life.”

Over the next four years, Hoffmann continued to travel every chance he got. He explored countries like the UK, Sweden, Ireland, and Turkey, adding to an impressive list that already included the likes of the Bahamas, Spain, and Venezuela. But it wasn’t until 2007 that he came up with the idea to film his travels and share them online. As his college graduation approached, Hoffmann founded David’s Been Here, put together a business plan, raised funds, and hired a small film crew.

With his film crew, Hoffmann returned to Europe, hosting over 500 short-form webisodes over two years. The webisodes showcased the historical sites, culture, cuisine, and nightlife in 22 countries. The usually warm and friendly Hoffmann adopted a serious, straight-laced on-screen persona for the daytime videos, and a more boisterous personality for his nightlife videos as he struggled to be himself on-camera.

“Yeah, for a while, I was trying to be something I wasn’t,” Hoffmann admits. “I was worried about what people would think if I was just myself, so I tried a lot of things that I thought I should be as not only a travel host, but also a young video creator in YouTube’s early days.”

It wasn’t until 2017 when Hoffmann realized that the landscape of YouTube was shifting  toward vlogging that he fully dropped the façades and embraced the things he thought viewers would balk at—his laid-back style, his Miami accent, and his imperfect grammar. He studied famous vloggers and worked to adapt the style to his own personality. Viewers immediately noticed the difference, and Hoffmann’s following began to grow.

In January and February of 2008, Hoffmann embarked on his biggest adventure yet—a 21-day solo trip through India. Hoffmann had wanted to explore the country for years, as it was brimming with the topics he liked to cover the most in his work: food, culture, and history. In particular, Hoffmann was excited to explore the vast and diverse world of Indian street food, which he dove into within hours of landing in the city of Delhi.

Unfortunately, Hoffmann didn’t anticipate the risks associated with foreigners eating Indians street food. On his fourth day in India, he fell violently ill on a train ride from Delhi to nearby Agra.

“It was horrible,” Hoffmann says. “I couldn’t stop vomiting and I had diarrhea as well. This was just four days into the trip and it lasted a whole week. I wanted to just crawl in bed, but I had to create content. So I kept traveling and barely ate anything for about ten days. Luckily, my local friends took care of me and took me to pharmacies to buy Pedialyte to keep me hydrated.”

Hoffmann’s drive to continue creating content through his illness paid off—the vlog series he produced from that trip was his biggest yet. It generated multiple viral videos with millions of views, and catapulted Hoffmann to new levels of success.

“That trip changed everything,” Hoffmann says with a laugh. “People recognize me out on the streets now and want to take selfies with me in airports. It’s crazy. I’m glad people are enjoying what I do.”

Following that trip, Hoffmann visited countries like Mexico, Japan, Guatemala, China, Suriname, South Korea, Uzbekistan, Armenia, and Kuwait, and continued returning to India to explore more of its diverse food and culture. He documented them all on YouTube and his website in the hopes of inspiring others to travel as well.

“I want David’s Been Here to be a one-stop resource for all your travel needs,” he says. “If you want to know what to see and do, which foods to try, or if you just need tips and travel advice, you’ll find it there. I want to inspire people to experience the magic and beauty of travel. There’s nothing like it and it will change you to your core.”