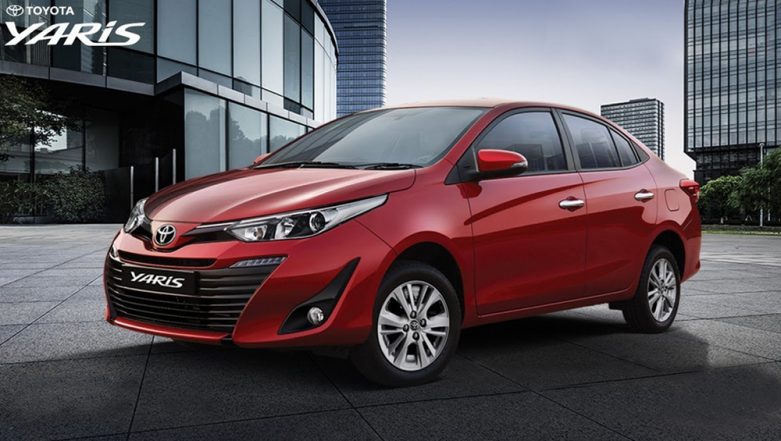 Toyota, a Japanese automaker is all set to launch its much awaited Toyota Yaris sedan in the Indian car market which is expected to be launched by May 18. The sedan was officially unveiled at this year's biennial motor show - Auto Expo in February. To be introduced with high level of localization, the new Yaris 2018 will be positioned below Corolla Altis in Toyota's domestic product lineup. Moreover, some Toyota dealers across the country have started taking pre-orders for the sedan with token amount of Rs. 50,000. To provide more details, we list down top 6 things about the new Yaris that you should know. See More: 2018 Toyota Yaris Vs Honda City Vs Hyundai Verna Vs Maruti Ciaz: Price, Features, Specifications Comparison

1. Dimensions: In terms of proportion, the new sedan is expected to measure 4425mm in length, 1730mm in width and 1475mm in height along with wheelbase and ground clearance of 2550mm and 133mm respectively.

3. Engine Specifications: Mechanically, Toyota's new contender in the mid-sized sedan space will be seen with single petrol engine only. The unit will be a 1.5-liter, dual VVT-I, 4-cylinder naturally aspirated petrol engine which will be tuned to make 108 bhp and 140 of power figures. The engine will be mated to a 6-speed or 7-speed CVT automatic transmission. The sedan will not been seen in diesel avatar as of now.

4. Expected Price: On the price front, the forthcoming Toyota Yaris 2018 is expected to carry a competitive price tag in comparison to its arch rivals. As per the market rumors, it is believed that the sedan is expected to get starting price of Rs. 8 lakh which is likely to go up to Rs. 10.5 lakh (ex-showroom). The Japanese car maker could surprise the buyers with a very attractive price tag undercutting the competitors.

5. Launch Date: The Company has officially confirmed at the biennial motor show that the arrival of new Yaris is imminent. As per the market speculations, it is rumoured that the car makers could launch the sedan on May 18. Another report also emerged on the net which specified that the Honda City rival will be launched by the end of this month. However, the Japanese car maker hasn't revealed any specific launch date yet. Read Also: Toyota official red-flags electric vehicle push in India

6. Competition: As far as the competition is concerned, the new Toyota Yaris 2018 will compete against the likes of Honda City, Hyundai Verna, Volkswagen Vento and Maruti Suzuki Ciaz in the C2 sedan space. The mid-sized sedan space has always been one of the lucrative market in India. Maruti Suzuki India dominated the C2 space with Maruti Ciaz followed by Honda City and Hyundai Verna.