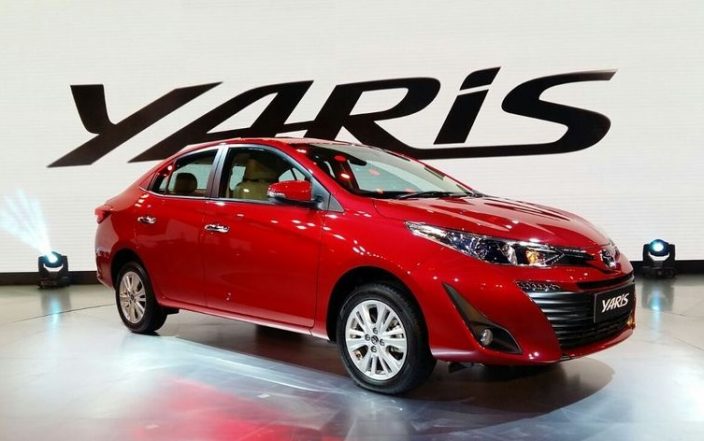 Toyota, a popular Japanese car manufacturer is gearing up to launch the much awaited Toyota Yaris sedan in the domestic market soon. As per the market report, the Japanese car maker is speculated to launch the new Yaris sedan by May 18 while the official bookings will kick by the end of this month. It is also reported that the sedan will be seen in single petrol avatar only. The car maker officially showcased the Honda City rival at the Auto Expo 2018 earlier this year in February.  Moreover, some Toyota dealers have already started taking pre-orders for the sedan with token amount of Rs. 50,000 reports AutoCar India.

Talking about the design, the new Toyota Yaris 2018 will sport a sharper design which is basically a toned down version of Corolla Altis. Flaunting Toyota’s global design language, the sedan features a wider grille, sleek headlamps, split tail light, wide air intake and much more. Dimension-wise, the Maruti Suzuki Ciaz challenger measures length, width and height of 4425mm, 1730mm and 1475mm respectively. The wheelbase of the all-new Yaris 2018 stands at 2550mm along with ground clearance of 133mm.

On the inside, the new Toyota Yaris 2018 will feature segment first features which will accentuate the overall appeal of the cabin. The interior is expected to carry black and beige combination for the India-spec Yaris sedan unlike sporty all-black layout seen on the international model. It will also carry a 7-inch touchscreen infotainment system with gesture control, a 4.2-inch MID, a 3-spoke bolstered steering wheel with multi-function controls, sleek air-conditioning vents and much more. As far as the safety is concerned, the new Yaris will get 7-airbags, ABS, EBS, ESP, Hill-Start Assist and other safety features.

Coming to the powertrain options, the new Yaris 2018 sedan will be seen in a single petrol engine - 1.5-liter, dual VVT-I, 4-cylinder naturally aspirated motor. The unit can produce max power of 108 hp along with peak torque of 140Nm and will be mated to a 6-speed manual or a 7-speed CVT unit. The sedan will not be seen in a diesel derivative, however, a hybrid avatar may be introduced on the later stage.

Lastly, the new Toyota Yaris sedan is expected to carry a competitive price tag because of the high level of localization. We speculate the sedan to fall in the price bracket of Rs. 8.5 lakh to Rs. 13 lakh (ex-showroom). Once launched, the sedan will take on the rivals such as Honda City, Maruti Suzuki Ciaz, Volkswagen Vento, Hyundai Verna and others.