Online hospitality major Airbnb on Tuesday announced that a temporary ban on house parties and events, announced in August 2020 in the aftermath of the COVID-19 pandemic, is now permanent. 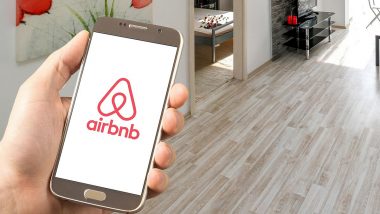 New Delhi, June 28: Online hospitality major Airbnb on Tuesday announced that a temporary ban on house parties and events, announced in August 2020 in the aftermath of the COVID-19 pandemic, is now permanent.

The temporary ban has proved effective and the company has now "officially codifying the ban as our policy". Scary Discovery! Woman Claims to Find 10 Hidden Cameras Inside Her Airbnb Room in Viral Video; Police Says No Undisclosed Recording Device Found

"We focus on trying to deter the very rare cases of Hosts who do not operate responsibly, or guests who try to throw unauthorized parties," the company said in a statement.

The policy will continue to include serious consequences for guests who attempt to violate these rules, varying from account suspension to full removal from the platform.

In 2021, over 6,600 guests were suspended from Airbnb for attempting to violate its party ban.

"In these cases, we also work to support our Hosts with property damage protection via AirCover for Hosts," said the company.

"As part of the updated policy, and based on feedback from a number of Hosts who have listings that can house above 16 people comfortably, we will remove this cap," said Airbnb.

In late 2019, the company tightened its measures to prohibit both "open-invite" parties (those advertised on social media) as well as "chronic party houses" that had developed into neighbourhood nuisances.

"Over time, the party ban became much more than a public health measure. It developed into a bedrock community policy to support our Hosts and their neighbours," Airbnb noted.

(The above story first appeared on LatestLY on Jun 28, 2022 07:50 PM IST. For more news and updates on politics, world, sports, entertainment and lifestyle, log on to our website latestly.com).