Leading fintech platform BharatPe on Thursday said it has initiated criminal and civil proceedings against its former Co-Founder and Managing Director, Ashneer Grover, his wife Madhuri Jain Grover and their relatives over huge misappropriation of company funds. 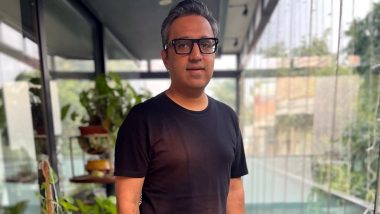 New Delhi, Dec 8: Leading fintech platform BharatPe on Thursday said it has initiated criminal and civil proceedings against its former Co-Founder and Managing Director, Ashneer Grover, his wife Madhuri Jain Grover and their relatives over huge misappropriation of company funds.

According to reliable sources, the company has asked Grovers to repay company funds to the tune of Rs 88.6 crore with 18 per cent interest which they swindled via various modes like creating fictitious bills, inflated vendor payments and personal use, among others. BharatPe Files Suit in Delhi High Court to Restrain Ashneer Grover, His Wife Madhuri Jain From Running ‘Vicious Campaign’ Against Company.

"BharatPe has initiated civil and criminal action against erstwhile Co-Founder and Managing Director, Ashneer Grover, former Head of Controls, Madhuri Jain Grover, and other connected parties of their family for various claims, including misappropriation of company funds," a company spokesperson told IANS.

"We have full faith in the courts and authorities and are confident that justice will be done. As the matter is sub judice, we have no further comment to offer at this stage," the spokesperson added.

While the criminal case has been filed with the Economic Offences Wing (EOW) in New Delhi, the Delhi High Court is currently hearing the civil case where the company has asked Grovers to repay company funds they allegedly misappropriated via various means.

The other parties in the BharatPe lawsuit are Deepak Jagdishram Gupta, who is Madhuri Jain's brother-in-law and worked as admin head and reported to Madhuri Jain.

According to earlier reports, Madhuri Jain herself received invoices for payments and forwarded them to the accounts team. These invoices were allegedly created by Shwetank Jain, who is her brother and has also been named in the lawsuit. Swiggy Layoffs: Food Delivery Platform May Lay Off Over 250 Employees, Company Says ‘Exits Based on Performance’.

According to BharatPe, Grover, his wife and their relatives were engaged in extensive misappropriation of funds and grossly abused company money "to fund their lavish lifestyles".

"The Grover family and their relatives engaged in extensive misappropriation of company funds, including, but not limited to, creating fake vendors through which they siphoned money away from the company's expense account and grossly abused company expense accounts in order to enrich themselves and fund their lavish lifestyles," the company had said in an earlier statement.

BharatPe had sacked Madhuri Jain over allegations of financial irregularities during her tenure at the company as head of controls. On the other hand, Grover decided to quit himself.

Suresh Jain, who is Madhuri's father, has also been named in BharatPe complaint, according to sources.

Ashneer has written his memoir called 'Doglapan' (double standards)-the Hard Truth about Life and Start-ups' which will be available this month.

(The above story first appeared on LatestLY on Dec 08, 2022 01:23 PM IST. For more news and updates on politics, world, sports, entertainment and lifestyle, log on to our website latestly.com).