Akshay Kumar Lauds Move to Open Positions for Transgenders in Paramilitary Forces in India, Hopes Other Occupations Will Follow Suit 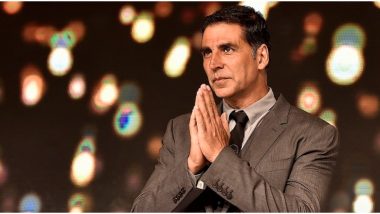 Akshay will be sort of seen playing the role of a transgender in his upcoming horror-comedy, Laxmmi Bomb, directed by Raghava Lawrence. The movie will stream online on Disney+ Hotstar. "Sort of" because Akshay will only be playing a man who is possessed by the ghost of a transgender woman. Akshay on Playing Transgender Character in 'Laxmmi Bomb': Was Mindful to Not Offend Any Community.

At present, there is no provision of hiring transgender people in the central paramilitary forces or the Indian Army. But things are ought to change soon.

Brilliant news! Now that’s a progressive move by the government in the right direction. I hope rest of the occupations in the country follow suit. https://t.co/r7tEWFR7JD

Earlier in May 2020, Akshay had come forward to donate Rs 1.5 crore for a home for the transgender people that is built in Chennai. Laxmmi Bomb director Raghava Lawrence was at the forefront of this project and while sharing the news with fans, he wrote on Facebook, "I consider everyone who helps as god , so now Akshay kumar sir is a god for us. I thank him for lending his huge support for this project. Our trust next vision is to uplift transgender’s and provide shelter for them all over India with Akshay Kumar’s sir support."

Akshay Kumar remains one of the rare few actors in the Indian film industry who played a gay man on screen. For a cameo appearance in the film Dishoom, which featured John Abraham and Varun Dhawan, Akshay did not mind letting his rainbow flag fly high. "As for my image, I'm fully aware I've been a gay icon in India for many years now," the actor said in an interview.

(The above story first appeared on LatestLY on Jul 05, 2020 11:45 PM IST. For more news and updates on politics, world, sports, entertainment and lifestyle, log on to our website latestly.com).