Several Bollywood stars have over the years done state tourism campaigns in order to get tourists visiting there. 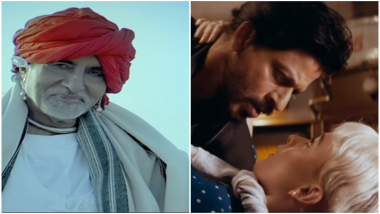 India has a rich cultural diversity and historical places that one can explore. A person exploring the country has options to choose from- soulful beaches, vast desert expanses, ancient temples or modernly developed tourist spots. There are several other places which remain unexplored because no one really knows such beautiful spots exist within our borders. It is important to promote these places to attract tourists and what better way than roping in Bollywood stars. These stars already have a huge fan-following and brand endorsements are attractive for people to pay heed to a product or service. Several Bollywood stars have over the years done state tourism campaigns in order to get tourists visiting there. Let us look at some of the stars who have been successfully helming the state tourism.

1. Amitabh Bachchan (Gujarat): Legendary actor Amitabh Bachchan has a distinct personality and a voice which is enough to recognize with. In 2010, the actor offered to be the brand ambassador of the state of Gujarat. And needless to say the actor has done his role so well. For the ad campaigns we saw him donning the traditional Gujarati attires. In one of the initial advertisem, nts he sported a turban, earrings and had kohled eyes as well. Plus his voice does the needful invite asking people to visit the state.

2. Shah Rukh Khan (West Bengal): Bollywood Badshah is spearheading West Bengal Tourism. His interest in the state was seen after he brought the Indian Premier League’s Kolkata Knight Riders’ team. The Chief Minister of the state Mamata Banerjee approached him and Shah Rukh was more than happy to take the responsibility. In fact, just recently there was a new advertisement which showed the actor speaking Bangla language. The advertisement beautifully captured the essence of the state and of course, Shah Rukh’s glamour bit just added more sweetness to this Sweetest part of India campaign.

4. Priyanka Chopra (Assam): Priyanka Chopra maybe becoming a more prominent face in the Hollywood industry today, but the actress is promoting the North-eastern state of Assam. She was appointed as the state tourism ambassador in December 2016 for two years. North-eastern state still remains to be a neglected part compared to the other parts of the country. By roping in a global star, the state will sure get its share of deserving attention from even the foreign countries now. Priyanka has just recently featured in the ‘Awesome Assam’ ad campaign. She looks lovely in the traditional attire doing the Bihu dance and her wide smile welcoming you to the state.

5. Irfan Khan (Rajasthan): Irfan Khan, the versatile actor who hails from Rajasthan took to promote his motherland in 2015. He was the face of the special campaign called Resurgent Rajasthan. In the special campaign we saw him donned both the avatars- a local from the state enjoying the culture along with a professional working in the industrially developed state. Just as his versatility in films, he did his job to help his state in whatever way he could.

6. Dharmendra- Hema Malini (Haryana): Actor Dharmendra and his wife Hema Malini were appointed as the brand ambassadors of Haryana’s Tourism Department in 2015. Haryana too has a lot of places of religious and cultural significance which again are not known enough. The couple, however, hasn’t done any notable ad campaigns to promote as expected.

These are some of the actors who have been promoting the diverse states within our country. Besides, there are several other actors who are actively promoting foreign tourism. On National Tourism Day today, we appreciate our actors who have been advocating the idea of traveling and trying to depict the best of the states through their ad campaigns. It is these stars who have a capability of driving the people of the country to explore more into the lesser known destinations.

(The above story first appeared on LatestLY on Jan 25, 2018 05:56 PM IST. For more news and updates on politics, world, sports, entertainment and lifestyle, log on to our website latestly.com).