Back in 2001, on September 28, when the film Chandni Bar hit the big screen, Madhur Bhandarkar, who was just two films old, could not imagine that this film would change his career. 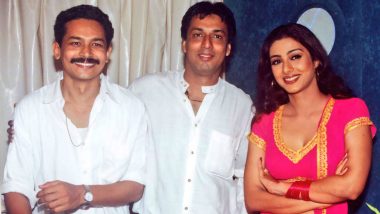 Back in 2001, on September 28, when the film Chandni Bar hit the big screen, Madhur Bhandarkar, who was just two films old, could not imagine that this film would change his career. It went on to get four National Film Awards and eventually, Madhur found his signature style of realistic storytelling in the Hindi film industry. Celebrating the 20th anniversary of 'Chandni Bar', in a conversation with IANS, Madhur recalled the journey of the film and now, 13 films and two National Awards later, what still motivates him to make a new film. Bikramjeet Kanwarpal Passes Away: Filmmaker Madhur Bhandarkar Reveals His Dream Project Was Film on ‘Siachen’.

"It has been quite an interesting journey for me. I have seen struggle, success, stability. I have gained the respect of audiences and of the film fraternity. I have got a certain amount of criticism, I have had creative blocks in between the films I made since the time I stepped into the world of cinema, but the excitement of narrating a story is the constant that drives me every day," Madhur said in one breath and then took a pause. Chandni Bar featured Tabu, Atul Kulkarni, Rajpal Yadav, Ananya Khare and Upendra Limaye, among others, and it was made with a budget of around Rs 1.5 crore. India Lockdown: Madhur Bhandarkar Wraps Up the Shoot of His Upcoming Film Starring Prateik Babbar, Shweta Basu Prasad.

Recalling that time, Madhur said: "My budget for the costume in the film 'Heroine' was much more than that! But look, I am not complaining at all. Till then, I had not delivered any successful film and 'Chandni Bar' was not a conventional film anyway. There have been films made based on the life of sex workers, tragic lives of women, and so on, but my film was very different. It was coming from some of the real-life incidents that I took up and weaved a story around them."

Continuing with his story, Madhur said in his interview to IANS: "I remember how someone said to me that the title of the film itself is so B-grade that no one wants to invest money in it. I was suggested to put more item songs and make the story 'loud'! I was sure that the female protagonist could go through a lot, but I would treat a female character with relatability and a certain dignity." The performances of Tabu, Atul and Ananya in the film were equally well-received by audiences and critics alike, Madhur said it was the presence of Tabu that took the story to the next level altogether.

"When eventually Lata Mohan, my producer, put immense trust in my film and made not compromises with the storytelling, I knew I had to deliver the best. And I am ever thankful to all my actors ... really I am. Tabu heard the narrative and she loved the character and came on board. Even though she was so young back then, she played the mother of two children in the film without any hesitation.

"Whether it was because of her screen presence or her skilled performance, our film got a different dimension because of Tabu. Now, when after all these years, people count 'Chandni Bar' as one of her best performances in her career, it makes me feel emotional and proud at the same time," smiled Madhur.

Being a filmmaker who always made films within limited budgets, Madhur said it did turn out be a limitation in some instances during the 'Chandni Bar' shoot. "I was not thinking too much about the limitations placed by the budget because for me it was like, finally I am making a film the way I want to ... that itself was exciting. You know, the budget was so low that we did not have a monitor on the sets, so we did not get a chance to recheck the shots ... so there were almost no retakes!

"I remember those crowd scenes were so tough to shoot on a limited budget. To gather a crowd, we had to call a lot of locals and junior artistes and we had to pay them. So for me, it was just somehow getting the right shot so that we did not need to recreate the scene again. "There were some technical challenges as well. But I would say again, I am not complaining. I would say it to all budding filmmakers as well, that count it as a blessing when you get an opportunity to tell a story without any creative compromises, especially when they are fairly new to the industry. Do not sulk about budgets, find creative solutions to the problem."

Since 2001, Madhur has had no looking back, having delivered films such as 'Satta', 'Page 3', 'Corporate', 'Traffic Signal', 'Fashion', 'Jail' and 'Heroine', working with some of Bollywood'smost celebrated actors, such as Konkona Sen Sharma, Kunal Khemu, Kareena Kapoor, Priyanka Chopra, Kangana Ranaut, Ajay Devgn and Neil Nitin Mukesh. 'Page 3', 'Traffic Signal' and 'Fashion' have won National Film Awards, along with other accolades.

"Yes, there was a time when I was not making films because there was a creative block," Madhur said, looking back. "And you see, I am a creative human being, not a machine. Twenty years with 15 films is fine with me. I have been making films without being a part of any lobby or group in Bollywood. I was an independent filmmaker, I am and I will remain the same."

As #ChandniBar marks 20 years of its release today,I thank my producer R Mohan my cast #Tabu @atul_kulkarni & entire star cast & technicians for making it a milestone..without them the journey wouldn’t be possible.thank u my audiences the love for CB.❤️🙏#20YearsofChandniBar pic.twitter.com/fExCWXX2ZT

Madhur said he had completed shooting his latest film 'India Lockdown', which will be releasing soon. "Now, when I look back, I hold a sense of satisfaction about my journey because when I started, I did not know if my work would get recognition," Madhur said. "Now that I have got that and much more, I am more focused on telling stories that matter to me and eventually to my audience, because for me, my film is the mirror of society," he added, signing off.

(The above story first appeared on LatestLY on Sep 28, 2021 07:00 PM IST. For more news and updates on politics, world, sports, entertainment and lifestyle, log on to our website latestly.com).