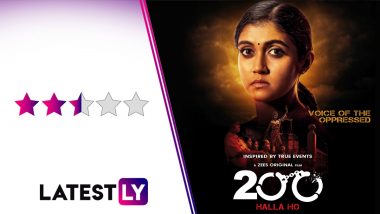 200 Halla Ho is reportedly based on real-life events. One day, many women barge in a courtroom and brutally mutilate and kill a criminal Balli (Sahil Khattar), while throwing chilli powder on the police escorting him. Since the women had covered their heads with their saris and the chilli powder thrown, the police couldn't identify the culprits, although somehow they managed to count there were 200 of them. With pressure from above, the cops arrest five women from the basti - Rahi Nagar - where Balli used to terrorise the womenfolk, even though they have no proof.

Asha (Rinku Rajguru) an educated girl from the same basti, tries to help them through legal course. In her aid is a lawyer, Umesh (Barun Sobti) who has a soft spot for her. There is also a respected retired Dalit judge Vitthal Dangale (Amol Palekar), who is asked to head the fact check committee by the women's welfare organisation to investigate what happened.

There are two main themes in 200 Halla Ho - social injustice against Dalits and crimes against women. It is great to see an 'elitist' industry finally acknowledge the Dalit subset of the society and try to address their problems. Here, basically the kind of disparity that the system of justice shows when it comes to taking care of them. The fact that 200 Hallo Ho is set in a city makes it all the more unnerving. Rinku Rajguru Opens Up About Her Upcoming Film 200 Halla Ho, Says ‘It’s Time We Raise Strong Voice Against Brutality on Dalit Women’.

Peace is something we all want when it comes settling disputes, but in a democratic society, peace only has value when it accompanied by justice. Being a legal drama, 200 Halla Ho bares out the naked truth that the backward classes of our society aren't seen as equals as their more privileged counterparts in front of the law and order system or even before the judiciary.

We see their plight through two spectra - the harassed women-folk of Rahi Nagar and the self-made, well-settled social nature of Vitthal. When the society celebrates the success of the latter, does it mean the privileged has softened its stance of the Dalits? Or is Vitthal one of the few examples that it tries to show itself in a more kinder light, while it continues atrocities against the OBC in the background? Remember this is a country where we have a Dalit President whose entry in a temple was blocked by priests.

So there is no doubt that 200 Halla Ho has several powerful moments and very disturbing ones too. The sequences that show Balli's terror against women are bone-chilling.

What I was disappointed in how the film was told, and how in an attempt to serve hope in a nihilistic world, 200 Halla Ho softened up towards the end. Something that might not have happened in real life, The attempt to present the film as a legal drama is interesting, but you can point out several loopholes in the way it is presented (at times, reminding me of the flaws in the 2016 film PINK). The film is also affected by the presentation of many trite tropes, like the frequent monologuing, the needless romantic subplot between Sobti and Rajguru whose lack of chemistry is glaring and in trying to get its tone right. The villain, Balli, feels like a two-dimensional character plucked straight out of a Kanti Shah movie, rather than a flesh-and-blood character high on his caste supremacy which would have made him complex and therefore, more terrifying.

The performances are decent, if not outstanding, including the veteran Amol Palekar who makes a graceful comeback to Hindi cinema. Rinku Rajguru is alright. A subdued Barun Sobti takes a more supporting role, which in a way, helps the film avoid the Brahmin saviour trope  but after a point 200 Halla Ho didn't really know what to do with his character. The way his track is written off is very lazy and could disappoint his fans.

- The Subject and Some Powerful Scenes

The arguments and the themes that 200 Halla Ho puts across deserves to be told. It is only their cinematic representation that leaves the film lacking in many places, and thus leaving message in a diluted state. 200 Halla Ho is streaming on Zee5.

(The above story first appeared on LatestLY on Aug 20, 2021 11:51 AM IST. For more news and updates on politics, world, sports, entertainment and lifestyle, log on to our website latestly.com).