25 Years of DDLJ: Aamir Khan Beautifully Describes this Shah Rukh Khan, Kajol Starrer, Thanks them For Making a Movie that Continues to Charm the World

Aamir Khan took to his Twitter account to congratulate Shah Rukh Khan, Kajol, Aditya Chopra and the entire YRF team for achieving this milestone while also describing why the movie was so appealing to all of us. 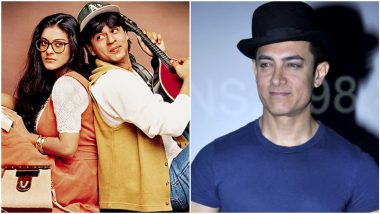 It was on this day that Shah Rukh Khan and Kajol's mega-blockbuster, Dilwale Dulhania Le Jayenge released in theatres and became a phenomenon that was hard to match. It was instantly able to strike a chord with the audiences and thanks to Aditya Chopra for giving us a movie to cherish for a lifetime. While the team is currently busy celebrating its silver jubilee, Aamir Khan too decided to congratulate his contemporaries for their achievement and thank them for making a movie so so special. DDLJ Turns 25: From Singing 'Mehndi Laga Ke Rakhna' in Every Antakshari to Enjoying Life With 'Jaa Simran Jee Le Apni Zindagi', Iconic Moments Shah Rukh Khan-Kajol Starrer Blockbuster Film Gave Us.

The Dangal actor took to his Twitter account to congratulate Shah Rukh Khan, Kajol, Aditya Chopra and the entire YRF team for achieving this milestone while also describing why the movie was so appealing to all of us. Aamir's sweet words have definitely made this celebration a lot special and we hope SRK and Kajol will react with sweeter reactions. The actors had earlier changed their Twitter names to Raj and Simran to mark the occasion and while they were at it, we were busy listening to all DDLJ songs on loop.

To celebrate this occasion, Heart of London Business Alliance had also announced their plans of installing a bronze statue of the lead pair in London's Leicester Square. According to a ToI report, the statue will depict a scene, which was filmed in the heart of the bustling city. DDLJ was released on big screens on October 20, 1995, and is the longest-running movie in the history of Indian cinema.

(The above story first appeared on LatestLY on Oct 20, 2020 09:11 PM IST. For more news and updates on politics, world, sports, entertainment and lifestyle, log on to our website latestly.com).