It has been 25 whopping years since the ever-popular romantic film, Dilwale Dulhania Le Jayenge released! 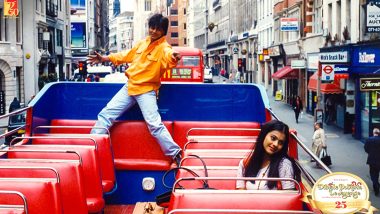 It has been 25 whopping years since the ever-popular romantic film, Dilwale Dulhania Le Jayenge released! DDLJ has been an eminent part of 90s kids, especially if they have been crazy Bollywood buffs. The film has created history in several ways. Hence, marking its 25th anniversary had to be grand. In a virtual way, the YRF team has already started to celebrate the big day. In fact, lead stars Shah Rukh Khan and Kajol have changed their names to 'Raj and Simran' on Twitter! DDLJ Turns 25: Shah Rukh Khan Reveals Why He Was Sceptical To Play A Romantic Hero.

SRK and Kajol also changed their profile pictures to Raj and Simran's look. While King Khan has his Twitter user name as 'Raj Malhotra', Kajol has it as 'Simran.' What an overdose of nostalgia! Shah Rukh Khan tweeted, "25 years!!! Filled with gratitude towards you for loving Raj & Simran, with all your heart. This always feels special." 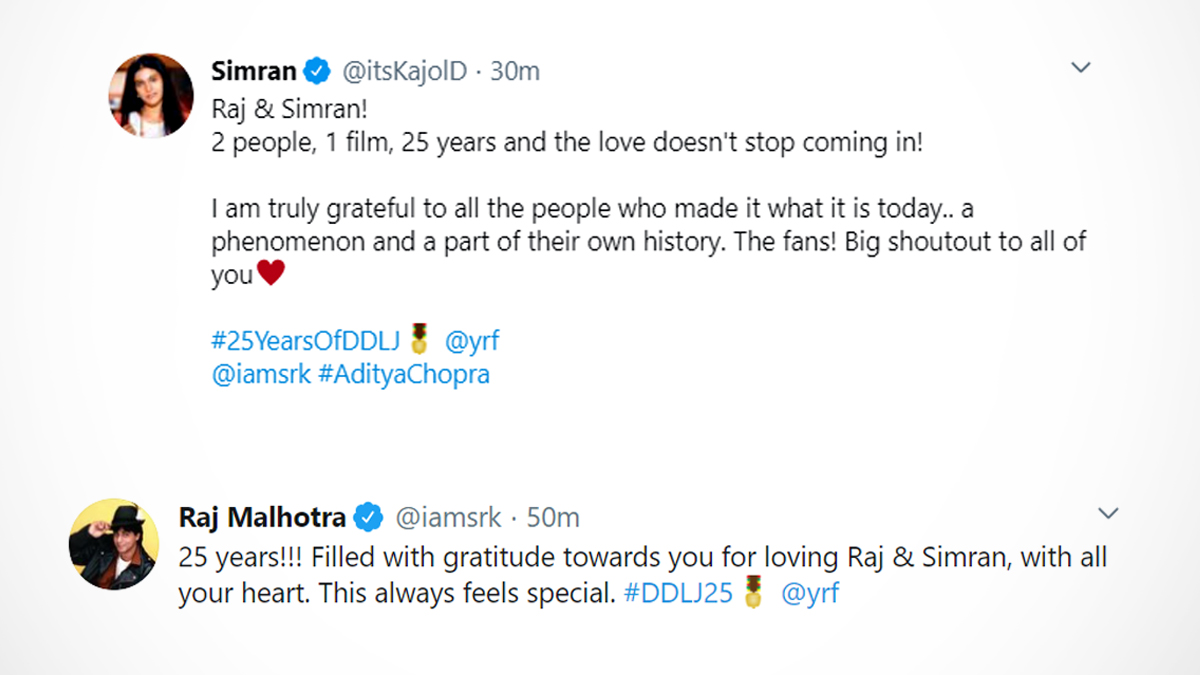 25 years ago on this day, the definition of romance was rewritten. Raj met Simran, they fell in love and since then, we can't stop swooning over this epic love story. Celebrating #DDLJ25 pic.twitter.com/ocpyDv0c5N

Kajol also took to the micro blogging site to write, "Raj & Simran! 2 people, 1 film, 25 years and the love doesn't stop coming in! I am truly grateful to all the people who made it what it is today.. a phenomenon and a part of their own history. The fans! Big shoutout to all of you." Check out the tweets below.

Well, 25 years of DDLJ indeed seems to be a long time but strangely feels like just yesterday! Everyone has their own set of memories while watching this movie for the first time, what are yours?

(The above story first appeared on LatestLY on Oct 20, 2020 11:15 AM IST. For more news and updates on politics, world, sports, entertainment and lifestyle, log on to our website latestly.com).