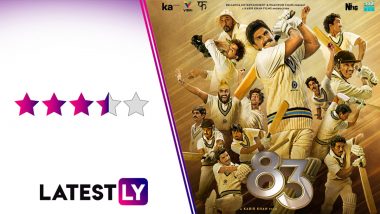 83 Movie Review: There are certain reviews that make me wish if I could put the entire cast in the headline and praise them eloquently. Unfortunately there is a limitation for that. Kabir Khan's 83 is one such film. Its biggest victory - apart from its crowd-pleasing tribute to one of Indian sports' biggest milestones - is plucking some fine actors to play Indian cricket greats and giving nearly everyone at least one moment to shine. Of course, leading them all is a magnificent act from Ranveer Singh as Kapil Dev, who once again proves why he is a bundle full of surprises when it comes to serving an unexpectedly transformative act. 83: Ranveer Singh’s Cricket Drama Takes the NFT Highway, to Drop Collection on December 23!

Those who know the rise of Indian cricket are very familiar with how the Indian cricket team fared during the 1983 Cricket World Cup. Sitting in a cafe writing this review in 2021, I find it now implausible on imagining how poorly the country saw the team then before the start of the campaign. I was born a year later, and when I got my first taste of cricket, India was one of the major forces in the sport.

In 2021, every multi-national tournament that India participates in, the team is always pegged as a favourite. BCCI is now the richest sporting body in the world where everyone wants a piece of the pie. Our present cricketers are guaranteed to turn millionaires if they are playing in the Indian cricket team or in the IPL.

So it is nearly impossible to imagine an Indian cricket team seen as minnows by the rest of the world, including their own administrators. It is difficult to think of a time where the only allowance that the players get is 15 pounds and where the captain has to launder his bedsheets on his own to save money; where Rs 25000 as prize money seems an unbelievable surprise to the players.

When India emerged champions in the 1983 World Cup, they hadn't only beaten the two-time champions, the mighty West Indians, filled with awe-inducing greats like Vivian Richards and Gary Sobers. They had also beaten insurmountable odds, minimal expectations and frequent ridicule and derision (even when they were winning matches, the wins were called flukes) to reach the top.

Kabir Khan's film works very well as a salute to the grit of those champions who made it possible. As I mentioned before, 83 is a very crowd-pleasing film It appeals very much to that side of you who jumps in jubilation when the Indian cricket team hits the winning run or bowl out that last standing wicket of the opponent.

As a sports drama, technically, 83 feels more like a highlights compilation where we are meant to savour the moments of ups and down than find ourselves watching the thrilling recreation of the matches. The editing of the matches rushes through the crucial moments, ushering a very dramatic effect through the crowd reactions.  In its execution, 83 may not be in the same league as Lagaan or Chak De India, two of the best sports films Bollywood has ever made. There is a reason for that.

Chak De India and Lagaan are both fictional movies, and therefore can use the screenplay to surprise the viewers. 83, since it is based on an actual World Cup tournament which was followed by many, cannot manipulate real matches like Dangal or Gold did. But there is a huge advantage too. 83 doesn't really need to manipulate stuff when the real-life victory is already a winning formula. Just like how Neeraj Pandey's MS Dhoni: The Untold Story turned a hit with the viewers, because Dhoni is so popular with cricket fans.

Yes, I wish at times that if 83 was made into a brilliantly cut docu-drama. Splice real footage with bytes from players and administrators, and use rare dramatised scenes and perhaps, we would have had a more effective tribute. Just see how highly effective Sachin: A Billion Dreams was (the child version of the master blaster makes a cheeky 'cameo' in 83)! But then we might not have the appealing recreation of the famous Kapil Dev knock of 175 not out against Zimbabwe - considered the most turning innings for the fate of Indian cricket - that was sadly lost because BBC was on strike that day.

Even in its present form, 83 the movie is a winner. Because Kabir Khan and his writing partners Sanjay Puran Singh Chauhan and Vasan Bala smartly use the bonding moments between the team-mates to create a very engaging film. From knowing which shot or moment would create the most impact to inserting cameos of the real-life heroes to splicing actual footage, it has to be said that the treatment will appeal to the viewers instantly.

It also helps that the actors are fantastic that I want to mention everyone here. Jatin Sarna as the late Yashpal Sharma, Tahir Raj Bhasin as Sunil Gavaskar, Saqib Saleem as Mohinder Amarnath, Nishant Dahiya as Roger Binny, Harrdy Sandhu as Madan Lal, Sahil Khattar as Syed Kirmani, Chirag Patil as Sandeep Patil, Dhairya Karwa as Ravi Shastri, Dinker Sharma as Kirti Azad, R Badree as Sunil Valson, are all fabulous in their roles. However, for me, the standout performances in the supporting cast came from Jiiva as K Srikanth and Ammy Virk as Balwinder Singh Sandhu. Both of them often stole the show in the non-match sequences. Especially Jiiva who was terrific in the Governor's Ball scene, where he tells a reputed British journalist as to why his captain's vision matters.

Pankaj Tripathi is, as always, winsome as the unsung hero of the campaign, the team's PR manager Man Singh. Deepika Padukone, who plays Romi Dev, is elegance personified though she wins us the most when she lets down her inhibitions and dances wildly in celebration to India's victory march. And of course, how can I not return to her both reel and real life husband, who led the entire squad with amazing poise and confidence like his real-life counterpart. It is difficult not to be a fan of Ranveer Singh's performance, when it roams around that nice fine territory of terrific emulation and never veering into mimicry. It is quite adorable when he speaks in broken English, and we feel his anguish in disappointing stares when the team isn't performing. This is easily one of the actor's best performances. The best thing is, he doesn't make the movie a one-man show! Ranveer Singh Grabs Everyone's Attention in His Red Bell-Bottoms and Tiger Print Tee Look As He Jets Off With Deepika Padukone.

While the movie is the best when it focuses on the team and its camaraderie (pretty sure inspired by the anecdotes the cricket legends might have shared), I wasn't really a fan when the focus shifts to beyond these heroes. The idea to use the scenes of fan reactions, or how India's winning march created a social revolution back in the country is understandable to show how the World Cup win mattered in the large scale of things. But the scenes often felt a little artificial. The humour and the drama used are more in Rajkumar Hirani arena, which I get it, as it might help in winning more of the audiences. I liked the tropes when they applied to the team, like that touching interval point when the sight of a tricolour lifts the spirits of the players (Pritam's "Lehra Do" is effectively used here). But not as effective when Kabir Khan had to show the impact of the matches on the spectators and the listeners.

PS: Felt a sense of irony when the then Prime Minister, the late Indira Gandhi uses the hype of the World Cup to quieten the communalism, whereas now the ugly head of that social disharmony is affecting the sport itself.

- The Entire Main Cast, Led By a Fantabulous Ranveer Singh

Kabir Khan, Ranveer Singh, Deepika Padukone and the entire team intended 83 to be an heartfelt ode to India's first major step into being superstars of cricket. While there are some misfieldings, the end result is a triumph for the makers and offers enough to cheer for the audience. Expect the theatre halls to be filled with whistles and cheers!

(The above story first appeared on LatestLY on Dec 21, 2021 12:19 AM IST. For more news and updates on politics, world, sports, entertainment and lifestyle, log on to our website latestly.com).