A Love Homed: Apurva Asrani and Boyfriend Siddhant Buy An Abode; Writer Reveals How They Used to Pretend to Be Cousins to Get a House (View Post) 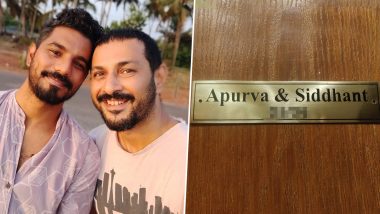 Unfortunately, even though India dispelled IPC Section 377 as no longer 'not illegal', the country is yet to open its arms to the LGBTQ community. It can be said that India is adapting but not accepting of the queer community, where even though Sec 377 is no more part of the air we breathe in, but still the so-called minuscule community and its voices are unheard. The taboo surrounding homosexuals still exists. However, while the straight people are still coming to terms with the 'openly gay' in the community, the scrapping of 377 has given a huge hope to the LGBTQ community who now have the liberty to openly be and be proud and also own their sexuality. Aligarh Writer Apurva Asrani Shares a Heart-Warming Message for Boyfriend Siddhant Pillai As SC Decriminalizes Homosexuality.

And in one such instance, acclaimed writer Apurva Asrani, who has been the brains behind projects like Satya (1998), Shahid (2013), Aligarh (2016) and the web-series Made In Heaven (2019) among others and has been openly gay for a while now, took to Twitter to announce the news that he and his partner Siddhant Pillai had finally purchased a house in the city. National Coming Out Day 2019: Confessing About My Sexuality to My Parents Was Tough… But Worth It In the End.

For 13 years we pretended to be cousins so we could rent a home together. We were told 'keep curtains drawn so neighbors don't know 'what' you are'. We recently bought our own home. Now we voluntarily tell neighbors we are partners 💕. It's time LGBTQ families are normalised too. pic.twitter.com/kZ9t9Wnc7i

In his post, Apurva mentioned how at a time when he and his sexual orientation were not accepted, he and Siddhant would pretend to be cousins in order to live in the same flat. He also recounted how they were given the warning to 'draw their curtains so that neighbours wouldn't find put about them'.

Well, while its a shame that a community was put through so much of social stigma and angst for being who they are, one can always hope that with Article 377 gone, there are all kinds of awareness with regards to the community. And what one must always remember is Justice Indu Malhotra's statement - "History owes an apology to LGBT persons for ostracisation and discrimination."

(The above story first appeared on LatestLY on May 29, 2020 11:11 PM IST. For more news and updates on politics, world, sports, entertainment and lifestyle, log on to our website latestly.com).