Here's looking at the top five celebrities who went 'off' from social media in 2021 due to personal or other reasons. The list includes Aamir Khan, Amit Sadh, Hina Khan, and more. Read on. 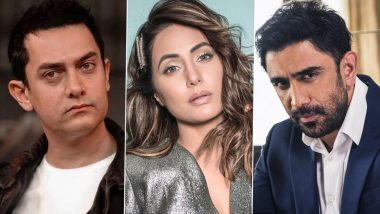 Celebs Who Have Left or Are on Break from Social Media (Photo Credits: Instagram)

The year 2021 has been tough for India. While we thought that we defeated the coronavirus after the 2020 mayhem.... but the virus mutated and Indians are still fighting to survive amid the second wave of COVID-19. In the midst of this, we even saw many Bollywood celebs saying goodbye to social media or taking a break from the online toxic-ness. While some did it as they wanted to 'drop the pretence', others left the platform for personal reasons. But overall, this move by our stars proved that they do care about their well-being... and we feel it's important too. So, here's a list of celebrities who are temporarily or permanently off from social media. Aamir Khan Quits Social Media, Shares Thank You Note for His Fans as His Last Message.

Aamir Khan being himself had taken to social media and posted his last message saying goodbye to fans. His reason to do so was that he was unable to keep a tab on his online profile and was hardly active... and so he decided to drop the pretence.

The reason for the Breath actor to go offline was the coronavirus scare in India. He was badly affected and so decided to take a break. A part of his last post read, "I believe my post and reels of gym sessions, the silly things I do, will not heal or entertain anyone. This is not a criticism to anyone. I personally feel the best way to be sensitive about the situation is to pray and hope for the things to get better."

Loveyatri actress Warina got inspired by Aamir Khan and in her last social media post mentioned that she's following his suit. However, she added that her team will manage her account so that her fans can get an idea about her work.

Fatima, who was last seen in Netflix's Ajeeb Daastaan also is no longer available on social media as she has taken a break. "Taking a break from social media. Stay safe guys" she had posted on her Instagram story without giving any reason. Hina Khan Takes A Break From Social Media After Her Father Aslam Khan's Untimely Demise (View Post).

After her father's untimely demise, popular star Hina Khan added to her Instagram story that she will be away from social media for a while due to her dad's death and her account will be handled by her team.

#Exclusive & #Breaking #HinaKhan took a break from Social media platforms & from now her social media accounts will be handled only by her team.

Means #Hina is now not on any social media platform & her account is managed by @HeenaLad (Her Manager)@eyehinakhan @JJROCKXX pic.twitter.com/NvT2yaums1

These are some of the latest celebrities who have quit or are on a break from social media in 2021. Well, let's see after these stars, how many more follow the bandwagon, as chain reaction is quite a common thing in Bollywood. Stay strong and state safe in these tough hours.

(The above story first appeared on LatestLY on May 05, 2021 08:26 PM IST. For more news and updates on politics, world, sports, entertainment and lifestyle, log on to our website latestly.com).