On Abhishek and Aishwarya's wedding anniversary, let's recall his proposal to her in New York. 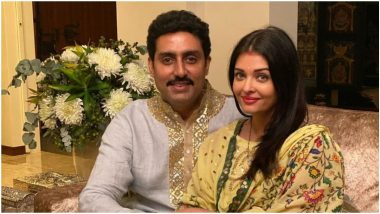 It was on April 20, 2007, when Aishwarya Rai Bachchan tied the knot with Abhishek Bachchan. And today 14 years after their blissful marriage, they still continue to dish out couple goals like never before. Abhishek and Aishwarya had worked in many movies together but love started blossoming when they were shooting for their hit song, Kajre Re from Bunty Aur Babli. It wasn't love at first sight but something that evolved over the years. In fact, Abhishek and Aishwarya had first met on the sets of Dhaai Akshar Prem Ke in 1999 but fell in love only in 2005. Fabulous Lives Of Bollywood Wives: Arjun Kapoor Reveals How Maheep And Sanjay Kapoor Spied On Abhishek And Aishwarya Rai Bachchan's Wedding.

While one may expect a dreamy and filmy proposal from this Bollywood hunk, it wasn't exactly one. Abhishek in his interaction with Oprah Winfrey soon after his wedding had revealed where he had popped the question to Aishwarya and well, it was on a balcony. “I was filming in New York for a movie, and I used to stand on my balcony of my hotel room and wish that one day… wouldn't it be nice if I was together with [Aishwarya], married? So I took her to the very same balcony, and I asked her to marry me.” And obviously, she said yes.

The couple got married after briefly dating for two long years and were blessed with a baby girl in 2011. Aishwarya is fiercely protective about her girl but she's also a daddy's princess. While they don't really believe in social media PDA, there are times when they have supported each other through her Instagram handles like when she shared her best wishes for his OTT debut with Breathe: Into the Shadows. Aishwarya Rai Bachchan and Abhishek Bachchan's Togetherness Picture Attracts Celebrity Wishes.

With pandemic still wreaking havoc in our lives and COVID-19 restrictions still in place, the couple will have a very intimate celebration this year and here's sending them all the good wishes and love for the same. Lastly, a very happy wedding anniversary to this gorgeous couple.

(The above story first appeared on LatestLY on Apr 20, 2021 09:00 AM IST. For more news and updates on politics, world, sports, entertainment and lifestyle, log on to our website latestly.com).