Aditya Narayan Birthday: Rangeela Re, I Love My India, Chota Bachcha Jaan ke - 7 Songs Of The Indian Idol 12 Host As A Kid Which Are Still Popular

On Aditya Narayan's birthday, we would like to talk to you about Aditya's songs he sung as a kid. In fact, he did a bit of rapping too! So there's Rangeela Re, I Love My India and of course, Chota bachcha jaan ke... 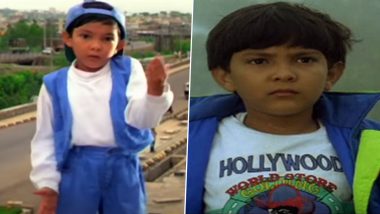 Aditya Narayan celebrates his birthday today. Now this generation may not be aware of his contribution to the 90s as a kid. The cute, chubby Aditya was a fan favourite. He has even acted with Salman Khan in Jab Pyar Kisise Hota Hai, Pardes with Shah Rukh Khan and appeared in Aamir Khan's Rangeela as well. That's a very rare distinction. We all are aware that Aditya sings quite well and that's genetic. Udit Narayan has been the voice of the 90s for all the heroes after Kumar Sanu. But Aditya's musical journey began at a very early stage. So on his birthday, we would like to talk to you about Aditya's songs he sung as a kid. In fact, he did a bit of rapping too!

AKAT is the story of a father and son in the second half. Aamir Khan and Adil Rizvi's bonding reached a pinnacle when they enacted the title track which was sung by Aditya and his father Udit Narayan. How fitting!

Aditya rapped in the song and surmised everything the kids in the 90s were bothered about.

Aditya gave so much power and emotions to this song that it became a rage. It is still the best way to shut up anyone elder bullying kids!

Keeping the copy controversy aside, the happier version of this song has Aditya Narayan singing a few couplets of this beautiful patriotic song with Kumar Sanu.

I love my India - Pardes

Narayan takes to rapping here too and adds the perfect contrast to a desi number elaborating about the great riches of India.

Narayan has sung many other songs before this happened, but this is a fan-favourite. Vishal Bharadwaj's music coupled with Narayan's young voice made this song a treat to hear and watch.

We all are pretty amused and amazed at this song from the Salman Khan-Karisma Kapoor film but the innocent voices of Aditya and Amol just gets etched in your heads.

Which among these is your favourite Aditya Narayan tracks?

(The above story first appeared on LatestLY on Aug 06, 2021 08:20 AM IST. For more news and updates on politics, world, sports, entertainment and lifestyle, log on to our website latestly.com).