There have been many instances when a particular scene from a Bollywood film is lifted from a Hollywood flick or an ad. Now, we've noticed that Ajay Devgn's Bhuj: The Pride of India's climax scene is also stolen from a truck ad. Check it out. 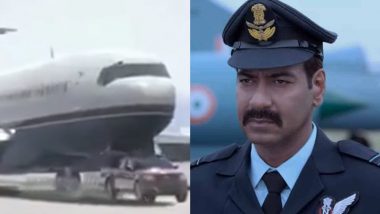 Bhuj: The Pride of India starring Ajay Devgn, Sonakshi Sinha, Sanjay Dutt, Sharad Kelkar, Pranitha Subhash among others premiered on Disney+ Hotstar on August 13. Set in the Indo-Pakistani war of 1971, the movie sees IAF Squadron Leader Vijay Karnik played by Devgn creating history with determination and his love for the country. The film had high expectations attached to it but received quite a lukewarm response from the critics and audience alike. However, the climax scene from the film where Ajay Devgn helps an aircraft to land was immensely praised. But, is that scene original? Read on. Bhuj – The Pride of India Twitter Review: Ajay Devgn’s War Film Garners Mixed Response From Netizens.

As while surfing the internet, we came across an old ad of a Nissan which sees how with the help of a truck, an airplane was able to land smoothly. In the climax scene of Bhuj, we see the exact same stunt performed by Devgn. Well, the moment we think that Hindi cinema is making us proud, by churning a visually stunning scene, we are left disappointed. You cannot disagree, as there is a lot of similarity between the Nissan ad and Bhuj's climax scene. Bhuj: The Pride of India Director Abhishek Dudhaiya Revisits His Grandmother's Story of 1971 War in His Debut Film.

Now, after watching both the videos, we are sure you are also convinced that Bhuj's climax scene is copied from the truck ad. Having said that, it's very rare when Bollywood brings originality to the table and this is definitely not one of those proud times. Bhuj: The Pride of India is directed by Abhishek Dudhaiya. What do you think about this? Tell us in the comment section below. Stay tuned!

(The above story first appeared on LatestLY on Sep 01, 2021 10:34 AM IST. For more news and updates on politics, world, sports, entertainment and lifestyle, log on to our website latestly.com).