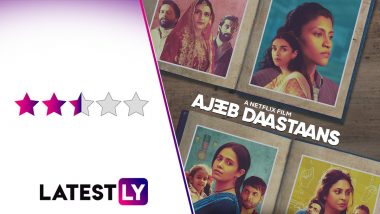 Ajeeb Daastaans Movie Review: After Lust Stories and Ghost Stories, Karan Johar brings up another anthology through Netflix with Ajeeb Daastaans. Translated as 'Strange Tales', this anthology has four unconventional stories, or so it claims, with each segment directed by a different filmmaker. Why trying to be different, each segment also gets a different treatment and evokes different emotions. There is a thing in common, though - each deals with society's closeted mindset towards marriage, honour, sexuality, class, and love. Ajeeb Daastaans: Nushrratt Bharuccha Recalls How Her House-Help Helped in Preparing for Her Role in the Anthology Film.

Majnu, written and directed by Shashank Khaitan (Dhadak), is a love triangle between a rich but dangerous man Babloo Bhaiyya (Jaideep Ahlawat, adept as always), his sexually frustrated wife Lipakshi (Fatima Sana Shaikh, saucy and scintillating) and her lover Raj (Armaan Ralhan), that inches closer to being what a triangle actually is. Majnu feels like a glossy take on Tigmanshu Dhulia's Saheb Biwi Aur Gangster, except that the Saheb has a past that he doesn't wish to reveal. The Biwi, ignored by her husband, doesn't loses herself in alcohol but seeks sexual gratification from the rest of the men around her house, more to taunt her spouse. And the Gangster is no gangster, but an MBA-ranker in finance, who makes his master richer in wealth and the mistress happier in love.

Through Majnu, Shashank Khaitan tackles marriages of convenience, as well as suppressed sexuality. More or less, though, this is mostly a romantic thriller that turns into a revenge story, that is as predictable as they come, with a very weak ending.

Khilauna, directed by Raj Mehta (Good Newwz) and written by Sumit Saxena, is a shade better. The narrative works at two levels. One is about the bonding between two sisters - Meenal (Nushrratt Bharuccha) and her school-going sibling Binny (Inayat Verma). Meenal works as maid in a couple of houses in an upper-class society, and she has an affair going on with Sushil (Abhishek Banerjee), who irons clothes for a living.

The other narrative is a couple of police officers interrogating the above three characters for a crime whose shocking nature (and the perpetrator) is only revealed in the end. Khilauna has a couple of nice aspects. The scenes between the sisters have its charms even with their connivances and manipulations to get their way through their livelihood. Inayat Verma's performance is a standout - the little girl makes a mark in every scene she is in. Nushrratt Bharuccha looks a bit more glam for her role but she performs her role very well, especially her scenes in the police station

What brings down the segment down is that it doesn't make the kind of impact that it aims to do. It wants to satirise the social divide (check how differently the police interrogates the underprivileged main characters, and then another suspect who comes from affluent household). But that comes across on a very surface-level (especially when the next segment handles the caste divide so diligently well). There is a scene where a cop tells her colleague, how the rich and the poor in the society treat each other like toys. The scene expects us to inhale its deeper meaning, but it actually feels very superficial. Aditi Rao Hydari’s Ajeeb Daastaans to Pooja Bhatt’s Bombay Begums: Digital Space Explores Lesbianism.

Even the 'suspense reveal', while euphemising the poor letting out their suppressed pressure in a very disturbing manner, still is something that isn't shocking enough, because the culprit's identity isn't as surprising as the manner in which it has done.

Konkona Sen Sharma is one of Indian cinema's most brilliant actresses, and that fact is once again reiterated in the third segment, Geeli Pucchi. Written and directed by Neeraj Ghaywan (Masaan), Geeli Pucchi has Konkona play Bhakti Mandal, a worker in a factory. She wants a desk job at the same company, but her manager instead gives that job to Priya Sharma (Aditi Rao Hydari).

Bhakti and Priya are poles apart. Bhakti is tomboyish n her appearance and doesn't adhere to society's idea of feminism; Priya is exactly how male privilege sees a woman - fair, homely and draped in sarees. Bhakti seeks the job because she knows she is qualified.  Priya comes with recommendation and isn't as good as Bhakti. Bhakti is more assured of her sexuality and her desires even if she isn't in a happy space; a married Priya is confused about her husband and her future and she is worried why she feels so and therefore also not in a happy space.

And yet what gives Priya her big advantage over Bhakti, apart from her perceived femininity, is her higher-caste privilege. Even when the women become friends, Bhakti, in a moment of seeking acceptance and taken by this sprightly woman, lies about her surname. She gets her moment of truth when she finally reveals her caste to Priya, and while the latter doesn't cut off the ties, the change in her demeanor is heartbreaking for Bhakti.

I thought the segment would end here, but Ghaywan has lot more to add in Bhakti and Priya's fractured friendship. The segment is longish than the rest, and the pacing does goes against it. But Geeli Pucchi's skilful take on caste-divide and LGBTQ+ relationships makes you root for this tale. I especially liked the portions after Bhakti reveals her real surname to Priya, the story, after making her sob in her despondence, takes Bhakti to some surprising turns, that I don't want to reveal here, but it leads to a bittersweet but satisfying ending.

Plus, like I said before, Konkona Sen Sharma is absolutely brilliant as Bhakti, her body language and her mannerisms just hitting all the right notes. Giving her some fantastic support is Aditi Rao Hydari, who manages to convey the complexity of the emotions her character is supposed to convey, mostly through her eyes.

Boman Irani's son Kayoze (who made his acting debut in Student of the Year) turns director with the last segment, Ankahi. It is about Natasha (Shefali Shah, looking damn ethereal), whose marriage in the rocks. Her frequent fights with her husband (Tota Roy Chowdhury) is about their teenage daughter (Sara Arjun), who has an ailment that is making her lose her sense of hearing. Natasha wants her husband to learn to communicate with their daughter in the way she understands; he believes he is already doing a lot for her and this is beyond his time and patience.

In her unhappiness towards her husband's negligent attitude, Natasha soon finds herself drawn to Rohan (Manav Kaul), a hearing-impaired artist who connects with her in a way that she has lost with her own partner.

For a first-time director, Kayoze shows a surprising amount of maturity and sensitivity in how he handles the story. Easily the most 'romantic' short of the lot, the segment touches your heart, even though I couldn't help but draw parallels to the Shilpa Shetty-Shiney Ahuja-Kay Kay Menon story in Anurag Basu's Life in a... Metro. The chemistry between Manav Kaul (heartbreakingly adorable) and Shefali Shah is so nuanced and touching. And of course, there is Shefali Shah's beautiful performance set within a troubled portrayal that makes you root for her story more.

To summarise. Ajeeb Daastaans has two disappointing shorts and two good ones. While no anthology is perfect, the thing that irks me about Ajeeb Daastaans is that, thanks to the title, it thinks that it is showing us something different. However, from occasional surprises and shocks - and Geeli Pucchi's Dalit commentary - there is nothing strange about Ajeeb Daastaans, apart from the fact that it comes from a banner known for making films with skin-deep level complexities. Wish they looked around and see that Indian cinema is changing when it comes to handling unconventional themes.

Like with the KJo-backed other two anthologies, Ajeeb Daastaans doesn't work as a whole but only in parts. One short is longish but impactful (Geeli Pucchi), one is stirring even if it hasn't anything novel to offer (Ankahi), and the rest two are just okayish. Ajeeb Daastaans is streaming on Netflix.

(The above story first appeared on LatestLY on Apr 16, 2021 12:37 PM IST. For more news and updates on politics, world, sports, entertainment and lifestyle, log on to our website latestly.com).