Uttar Pradesh Chief Minister Yogi Adityanath in in Mumbai for the launch of the Rs 200 Crores Lucknow Municipal Bond, that will be launched at the at Bombay Stock Exchange on December 2 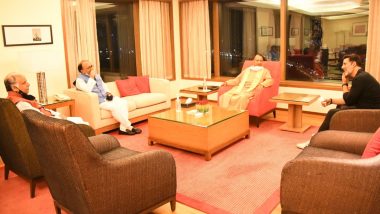 Uttar Pradesh Chief Minister Yogi Adityanath in in Mumbai for the launch of the Rs 200 Crores Lucknow Municipal Bond, that will be launched at the at Bombay Stock Exchange on December 2. And on the eve of the CM being in the city and his keen interest in the setting up of a film city in Noida, Bollywood actor Akshay Kumar reached out to him and met up at Oberoi Trident, where the CM has been up for the duration of his stay. Yogi Government Giving Final Shape To Film City in UP, CM to Meet Bollywood Celebrities.

In fact, back on September 22, the CM had met up and sought suggestions from representatives of the film city and seeked their inputs for the Film City under works in Noida. As per reports, apart from creating a shooting space in 1000 acres if Sector 21 of Yamuna Authority, the Film City will also fecilitate pre production, production and post production of film making under one roof, at one place, and to develop facilities for club, sports, village, teleport, commercial, internal and external location, facility of sound mixing studio, special effects, color transformation, video editing etc. Uttar Pradesh CM Yogi Adityanath Announces to Set Up India’s Biggest Film City in Noida.

Other industry folk that CM Yogi Adityanath will be meeting are Boney Kapoor, Madhur Bhandarkar, Bhushan Kumar, Tigmanshu Dhulia, Nikhil Advani and others. The making of the Film City in UP is an important step given how in the past three years alone, more than 38 films have been given a grant of approximately Rs 21 crore. And now, scripts of 22 more films have been approved by the UP Film Bandhu Committee.

(The above story first appeared on LatestLY on Dec 01, 2020 10:18 PM IST. For more news and updates on politics, world, sports, entertainment and lifestyle, log on to our website latestly.com).