Alia Bhatt, Hrithik Roshan and Neeta Lulla Among the 819 New Members Invited to Join The Academy of Motion Picture Arts and Sciences 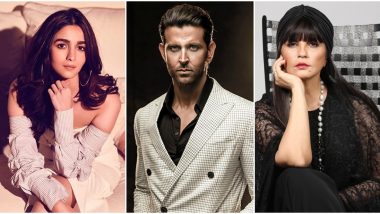 The Academy of Motion Picture Arts & Sciences aka Oscars has released its annual list of new members but this time, they have ensured to make it more relevant. After receiving the backlash for #OscarsSoWhite and being "men friendly", the academy this year has extended their invitation to a large number of women, international members, and underrepresented ethnic/racial communities. Academy Explains the Exclusion of Luke Perry, Cameron Boyce From Oscars 2020 In Memoriam Segment.

Adèle Haenel – “Portrait of a Lady on Fire,” “BPM (Beats Per Minute)”

Huang Jue – “Long Day’s Journey into Night,” “The Lady in the Portrait”

Udo Kier – “The Painted Bird,” “Shadow of the Vampire”

Lakeith Stanfield – “Knives Out,” “Sorry to Bother You”

Timka Grin – “With Mom,” “In the Land of Blood and Honey”

Yesi Ramirez – “The Hate U Give,” “Moonlight”

Hila Yuval – “A Tale of Love and Darkness,” “Beaufort”

Jarin Blaschke – “The Lighthouse,” “The Witch”

Ron Johanson – “Freedom,” “The Woman Inside”

Polly Morgan – “Lucy in the Sky,” “The Truth about Emanuel”

Nicoletta Ercole – “Letters to Juliet,” “Under the Tuscan Sun”

Dayna Pink – “Bumblebee,” “Seeking a Friend for the End of the World”

Speaking about the new list where the academy has tried to all-inclusive when it comes to representation, CEO Dawn Hudson said, "We take great pride in the strides we have made in exceeding our initial inclusion goals set back in 2016, but acknowledge the road ahead is a long one.  We are committed to staying the course.  I cannot give enough thanks to all our members and staff who worked on the A2020 initiative and to our head of Member Relations and Awards, Lorenza Muñoz, for her leadership and passion in guiding us through to this point and helping to set the path going forward. We look forward to continuing to foster an Academy that reflects the world around us in our membership, our programs, our new Museum, and in our awards."

(The above story first appeared on LatestLY on Jul 01, 2020 08:40 AM IST. For more news and updates on politics, world, sports, entertainment and lifestyle, log on to our website latestly.com).