Arun Govil Birthday Special: Did You Know The Actor Voiced Lord Rama In An Animated Movie Directed By A Japanese Filmmaker?

Who remembers Ramayana: The Legend Of Prince Rama? The animated movie of 1992 co-directed by Japanese filmmaker Yugo Sako and Indian animator Ram Mohan never got a release in India but received a lot of acclaim overseas. Our birthday boy Arun Govil voiced Lord Rama in the Hindi version of the film. 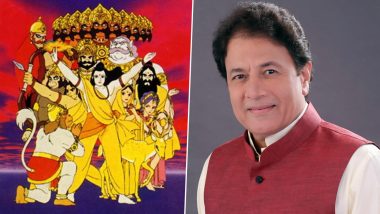 Arun Govil or rather Lord Rama celebrates his birthday today. Pardon us for this blasphemy, but if you ask any of us kids who grew up in the 90s, Arun Govil and Lord Rama weren't two separate entities. Ramayana, as a text, mythology or scripture, has always interested people from abroad. A Japanese filmmaker by the name of Yugo Sako also got fascinated by the story of valour of Lord Rama. He decided to make an animation film on the story which was dubbed in many languages. While Lord Rama was voiced by Arun Govil in the Hindi version, Bryan Cranston did the honours for the English version and international audience of Ramayana: The Legend Of Prince Rama. It was co-directed by legendary Indian animator Ram Mohan. But sadly, this movie never hit the theatres in India because of a controversy. Ramayan Trivia: Did You Know ‘Ram’ Arun Govil Once Also Played ‘Laxman’ In This Jeetendra-Jaya Prada Film?

We are talking about 1992 here. According to a Scroll report, the idea to make a movie on Lord Rama and his bravado came to Sako when he was working on a documentary called The Ramayana Relics in 1983. In an old interview, he had said, "Because Ram is God, I felt it was best to depict him in animation, rather than by an actor." Reports suggest VHP took offense to turning Hindu Gods into cartoon characters. The film skipped Indian theatres but got a lot of acclaim on the overseas shores.

Check out the movie here.

Yea VHP did come around as we have watched Hanuman at the theatres. But it seems Lord Rama is an exception. Guess who voiced Ravana in the Hindi version? Amrish Puri!

(The above story first appeared on LatestLY on Jan 12, 2021 08:50 AM IST. For more news and updates on politics, world, sports, entertainment and lifestyle, log on to our website latestly.com).