'Avengers: EndGame' Screening Brings Sushant Singh Rajput and His Ex Kriti Sanon Under One Roof! Read On To Know The Twist In The Tale!

"Kriti and Sushant will bump into each other. The film is about to end and the lobby is here too narrow for the two ex lovebirds to miss each other," exclaimed Kriti's fan! 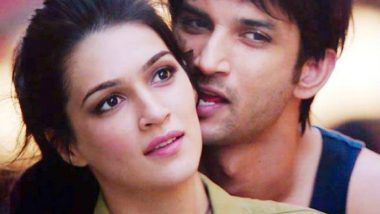 The most talked about cinematic spectacle Avengers: EndGame might have been the talk of the global town, but its screening in our very own aamchi Mumbai has witnessed an interesting event that raised our eyebrow. It so happened that the film's screening was held at PVR Juhu this evening where Kriti Sanon and Sushant Singh Rajput were spotted under one roof. Yes, and just when we thought that the two good looking people, and the ex flames of course, would unite for.... ahem the EndGame, there was a major twist in the tale.

Sushant Singh it seems timed his entry well so as to avoid a rather uncomfortable situation of bumping into Kriti. While the leggy lass arrived at the said venue with her sister Nupur quite early, Sushant came much later and entered straight into the screen. We started entertaining the prospect  of the two stars eventually meeting and greeting each other, while their way out of the movie hall,  if not at the popcorn counter! Avengers EndGame Movie Review: Marvel’s Superhero Film Is an Emotionally Wrenching, Enriching FanBoy Experience That Goes for Your Heart!

"Kriti and Sushant will bump into each other. The lobby is here too narrow for the two ex lovebirds to miss each other," exclaimed Kriti's fan who was keeping his 'sticky eyes' out there to track any movement shown by the duo. And just when one of the key sequences of the superhero flick was about to unfold, good 15 minutes before the interval, Sushant moved out of his seat and started walking towards the exit door. Avengers EndGame Full Movie Leaked Online by TamilRockers For Free Download; Marvel’s Superhero Film Available Online in HD Print With Post-Credits!

It was quite evident that he just wanted to get out of the place before any uncomfortable scenario witnessing him (or him and Kriti together) being captured on cameras. So technically, the two watched the movie together, but Sushant did not give paps any 'together' moment to talk about as he avoided the 'endgame' with his presence of mind!

(The above story first appeared on LatestLY on Apr 26, 2019 09:36 PM IST. For more news and updates on politics, world, sports, entertainment and lifestyle, log on to our website latestly.com).