Directed by Farhad Samji, produced by Sajid Nadiadwala, Bachchan Paandey featurs Akshay Kumar, Kriti Sanon, Arshad Warsi, Pankaj Tripathi among others. It takes audiences through the heartland of India with larger-than-life visuals and Akshay Kumar in a never-seen-before, menacing avatar. The film releases in theatres on March 18. 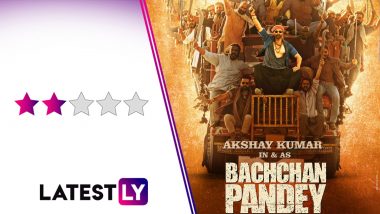 Bachchhan Paandey Movie Review: Walking into the theatre to watch Bachchan Paandey, you realize what you have signed up for. After witnessing the trailer of Akshay Kumar's latest outing, and going by the stable it has come from, you know what's on offer. Sajid Nadiadwala and Kumar join hands to dish out entertainers that usually demand checking your grey matter at the entrance of the theatre. But unlike the duo's previous films, Bachchan Paandey remains largely yawn-inducing and highly contrived even if we employ Nadiadwala's own yardstick. The humor is stuck in the '90s and there isn't much here that tickles your funny bone by offering anything new. Bachchhan Paandey Song Meri Jaan Meri Jaan: Akshay Kumar, Kriti Sanon’s Love Looks Pure.

Borrowed from the Telugu film 'Gadalakonda Ganesh', which in turn was the remake of the Tamil movie 'Jigarthanda', director Fahad Samji gives us a tale that will surprise you with its over the top nature. Watching this one unfold, you genuinely want this film to work either as a total slapstick or as a screwball comedy, alas Bachchan Paandey manages to bore you out of your skull. The maker tries to convert the film into a strange mix of different genres, but the attempt falls flat on the face and you feel exhausted after wasting 149 minutes of your life.

Bachchan Paandey tells the story of an aspiring assistant-director (Kriti Sanon) who wants to make it big by making a gritty and dark realistic film revolving around the ruthless gangster Bachchan Paandey (Akshay Kumar). With the able support of Arshad Warsi's character, the lady approaches the notorious killer who draws blood for the pure joy of killing people. In this endeavor director throws multiple actors such as Sanjay Mishra, Pankaj Tripathi and Seema Biswas, but they all are wasted in what turns out to be a long yawn fest. Ahead Of Holi 2022, Akshay Kumar-Kapil Sharma Discuss How People Celebrate The Festival of Colours And The Details Will Leave You In Splits (Watch Video).

The film offers some really stunning locations, the camera work and the action sequences are sleek, but what it lacks is a substantial script to mount on these glossy facets. In that regard, you feel cheated as an audience. Just when you expect that apart from all the gloss and the starry facade, the film will gain some momentum to give you some really good moments to cherish, you are let down by the muddled script and a storyline that fails to take off.
If you are an Akshay Kumar devotee, you will enjoy how he dishes out this freak show by playing the manipulative and menacing character. We know how Kumar employs his poker face and his superb comic timing to evoke laughs but in this endeavor, he does everything so over the top, and way too often at that, you start getting irritated with the sub-caricaturish-sub-realistic terrain he walks into. Bachchhan Paandey Movie Review: Akshay Kumar, Kriti Sanon, Arshad Warsi’s Film Declared a Hit by Netizens.
The film constantly shifts its arcs and the narrative switches haphazardly to leave you confused, perhaps the end result of six people writing the script. Holi pe goli is the tagline of the film. Just like a mad riot of colours can leave you look absolutely horrible to look at, this film's multi-genre texture can take you far off from the comical canvas that was promised to you.
Kriti Sanon gets the maximum screen time and she has done a good job of it, though nothing remarkable to talk about. The only saving grace here is Arshad Warsi, easily the most underrated and supremely gifted actor of the industry, who knows the pulse of this confusing film and yet he molds himself as per the flow of the ever-shifting sequence. Warsi's comic timing and his adaptability make him such a delight to watch.

Bachchan Paandey is crafted for Akshay Kumar fans alone (read devotees). If you are seriously looking for a good comedy, you are likely to be disappointed with what's on offer here.
Rating:2.0

(The above story first appeared on LatestLY on Mar 18, 2022 05:34 PM IST. For more news and updates on politics, world, sports, entertainment and lifestyle, log on to our website latestly.com).