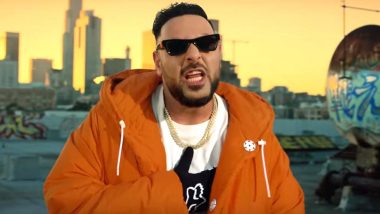 Indian rapper and singer, Badshah is having a hard time. As the celebrity has been making headlines from a past few days for all the wrong reasons. Reportedly, Mumbai Police has claimed that the "Dj Waley Babu" singer has spent Rs 72 lakh to buy fake views for a music video with an aim to break the viewership record. In this, Badshah was also questioned about the racket that sells views and followers to influencers online. Amid this, while the singer has denied all the allegations levelled against him, looks like, the internet is having a fun time churning memes and taking a sly dig at the singer. Sona Mohapatra Reacts To Claims Of Badshah Buying Fake Views, Says 'I'd Call It Building An Empire Using Matchsticks'.

All in all, the fake views news has led to a storm on Twitter where many has called out Badshah. From commenting on his singing skills, bringing Bollywood celebs into the joke to even leaving no stone unturned to mock Badshah, the internet is no mood to calm down. Check out a few memes on the same below. Badshah Denies Involvement in Fake Social Media Followers Scam.

This One Is For Fans!

"Following the summons, I have spoken to the Mumbai Police. I have aided the officials in their investigation by cooperating and carrying out the due diligence on my part. I have categorically denied all the allegations levelled against me and made it clear that I was never involved in such practices, nor do I condone them," a part of a statement issued by Badshah read. Stay tuned!

(The above story first appeared on LatestLY on Aug 10, 2020 11:20 AM IST. For more news and updates on politics, world, sports, entertainment and lifestyle, log on to our website latestly.com).