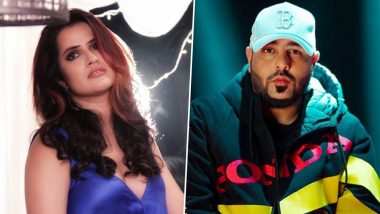 Famed rapper Badshah has been in the news since a couple of days after Mumbai Police claimed that the singer-rapper paid Rs 72 lakh for additional views on one of his music videos, in a bid to break a viewership record. The "DJ Waley Babu" singer is being questioned in connection to a racket that sells fake followers and views to social media influencers. While Badshah has denied all the allegations saying, "I was never involved in such practices, nor do I condone them", singer Sona Mohapatra recently took to Twitter to react to the same and called it a common practice among influencers to build social media perception. Badshah Denies Involvement in Fake Social Media Followers Scam.

Taking to Twitter, Sona wrote, "I’d call it building an empire using matchsticks but the sad part; most do buy into this perception game. The shaadi circuit pays enough to afford these buyouts with their ‘status’ oriented,’live?’music choices...Actors, first to get on to this & of course the Punjabi ‘artists’." The singer is known for being vocal on issues and has been among the first from the music industry to react to the same.

I’d call it building an empire using matchsticks but the sad part; most do buy into this perception game.The shaadi circuit pays enough to afford these buyouts with their ‘status’ oriented,’live?’music choices...Actors, first to get on to this & of course the Punjabi ‘artists’.🤟🏾 pic.twitter.com/57PCHTfkNs

The fake social media followers scam is being investigated by the Mumbai Police since last month. Mumbai Police busted the scam on July 14 through analytical technical-intelligence. Till date 20 prominent personalities have been investigated in relation to this scam. Deepika Padukone and Priyanka Chopra To Be Questioned By Mumbai Police Over Fake Social Media Followers?

As for Badshah's name coming up, the singer had claimed that his music video for "Pagal Hai" had been watched 75 million times on its release day. According to this number, it has beaten records of Taylor Swift and the K-Pop band BTS although it has been reported that these claims were rejected by Google.

(The above story first appeared on LatestLY on Aug 10, 2020 08:30 AM IST. For more news and updates on politics, world, sports, entertainment and lifestyle, log on to our website latestly.com).