Bala Goes on Floor - Here’s All You Need to Know About Ayushmann Khurrana, Yami Gautam and Bhumi Pednekar’s Film 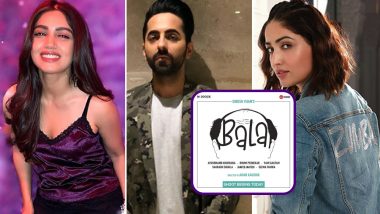 Bala Goes on Floor: Here’s All You Need to Know About Ayushmann Khurrana, Yami Gautam and Bhumi Pednekar’s Film

Ayushmann Khurrana is reuniting with his Shubh Mangal Saavdhan and Vicky Donor co-stars Bhumi Pednekar and Yami Gautam respectively for the Amar Kaushik-directorial Bala. Kaushik has helmed the 2018 box-office hit Stree while this anticipated project will revolve around a cautious social subject of Premature Balding. Which proves once again that Ayushmann is taking another risk with films with a social subject as most of his films do. He will be playing a character who suffers from the condition and will be seen having a bald patch in the movie.

Co-star Yami Gautam spoke about working with Ayushmann after Vicky Donor, in Bala. She said, “I’m excited to be working on Bala. It’s a great script, and a relevant concept and an amazing team working on it. It’s been an overwhelming time for me this year, starting with Uri and now with coming on board for Bala. We begin shooting for the film this week and I look forward to being part of another strong film with a great story backing it.” Ayushmann Khurrana-Yami Gautam To Rekindle Their 'Vicky Donor' Chemistry in Amar Kaushik's Film Bala

The film went on the floor on May 7 with Maddock Films' official Twitter handle made the announcement. They tweeted the poster that had the deets of the cast along with director Amar Kaushik and producer Dinesh Vijan - "Excitement is in the hair.. err air! The shooting for #Bala begins today, @amarkaushik directs! #DineshVijan @ayushmannk @bhumipednekar @yamigautam @saurabhshukla_s @jaavedjaaferi #SeemaPahwa @JioCinema" Bhumi will be seen in Bala as a dusky small town educated girl, while Yami plays a supermodel based in Lucknow. The film will be extensively shot in Mumbai and Kanpur. Salman Khan and Bhumika Chawla's Tere Naam Will Have a Sequel, Confirms Director Satish Kaushik

Speaking about this project, Dinesh Vijan said in a statement “This time, last year we were shooting Stree, and it’s surreal that we are starting another film with Amar today. Bala is entertaining, witty and lovable, and we have a great cast to tell this story,” Moreover, Ayushmann Khurrana is on a roll with back to back box office hits Andhadhun and Badhai Ho. Will this be another hit in his kitty? Share your thoughts below.

(The above story first appeared on LatestLY on May 07, 2019 03:03 PM IST. For more news and updates on politics, world, sports, entertainment and lifestyle, log on to our website latestly.com).