Before Mimi, Here're Five Other Bollywood Movies Made On Surrogacy And Assisted Pregnancy

Mimi tried to be more than a tale of surrogacy but failed to make a mark with any of them, including the core theme of the film. If that has left you a bit disappointed, we can suggest a few movies from Chori Chori Chupke Chupke to Vicky Donor which could be better alternatives to this Kriti Sanon movie 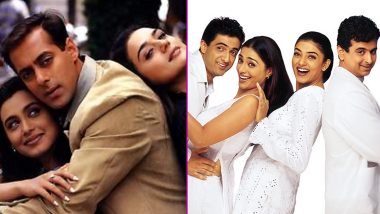 Mimi released today which tried to talk about surrogacy, a bit about abortion and tried to throw in adoption too. It unfortunately became a hotchpotch of all the above topics circling around them without taking a deep dive within. If that has left you a bit disappointed, we can suggest you some more movies which based around surrogacy and assisted pregnancy. Not all the movies listed here will be better than Mimi but most of them are and as such, they are highly recommended. Mimi Movie Review: Kriti Sanon and Pankaj Tripathi’s Admirable Performances Barely Support a Deeply Taxing Film (LatestLY Exclusive)

Doosri Dulhan is story of a couple where the wife loses the ability to procreate after a miscarriage. The husband then visits a brothel and asks a young girl to be his child's surrogate mother. The couple was played by Sharmila Tagore and Victor Banerjee while the brothel girl was played by Shabana Azmi. Directed by Lekh Tandon, it was a very subtle yet highly emotional movie which tugs at your heartstrings.

Remember we told you above how not all movies on the list will be a notch above Mimi? CCCC fits that category. A Doosri Dulhan meets Pretty Woman story, the film had Salman Khan, Rani Mukerji and Preity Zinta in the lead. Apart from the music, nothing much can be said about this movie except for the fact that surrogacy perhaps received so much mainstream attention thanks to this movie.

Meghna Gulzar's this film is a lot more than just pregnancy or surrogacy. It's about friendship, love, trust, faith and marriage. Sushmita Sen and Tabu play best friends who are ready to do anything for each other. So when Tabu is devastated to know she can't bear a child, her friend steps in putting her love life at stake. Although Palash Sen is the biggest misfit in the film, this movie treads the story so eloquently that you will cherish it.

I Am is an anthology series by Onir which dealt with various subjects and sperm donation was one of them. Onir wanted to expose the way things are handled in this country in such areas. The story is about a woman who wants a child but her husband leaves her for another girl. She decides to have a kid anyway but through in-vitro. She visits a clinic and even meets the donor which should have been a confidential thing. The despair and the desire in this segment were very palpable.  Mimi: From Surrogacy to Abortion, 5 Social Issues Kriti Sanon's Movie Addresses But Fails To Make It Count

Sperm donation became hugely popular in mainstream cinema after Vicky Donor. Ayushmann Khurrana played a guy who donates sperm in plenty and lives a grand life from the money that he earns. A perfect mix of humour, social messaging, harsh realities of the system, the stigma... VD managed to educate more people about the process than any pamphlet at a doctor's clinic.

(The above story first appeared on LatestLY on Jul 27, 2021 03:26 PM IST. For more news and updates on politics, world, sports, entertainment and lifestyle, log on to our website latestly.com).