Mimi's leak on torrent sites four days before its scheduled release earlier is hardly its problem anymore. The Kriti Sanon-Pankaj Tripathi film does a disservice to every social issue it addressed. We give you five of them. 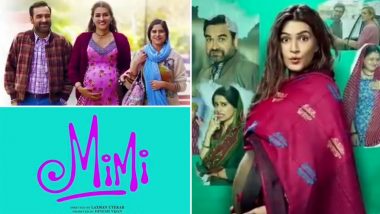 Mimi was released last evening on Jio Cinema and Netflix following its leak on torrent sites. The makers pegged it as a birthday gift for Kriti Sanon who celebrates her special day today. But the leak is hardly the movie's issue anymore. After watching the film, it comes across as a heady cocktail of every societal woe in India packed so closely together that none of them get the space to bloom. This includes the main theme of the film - Surrogacy. Mimi is about a small-town girl with Bollywood dreams who decides to be a surrogate so that she can pay for her photoshoot with a hotshot photographer.  Mimi Movie Review: Kriti Sanon and Pankaj Tripathi’s Admirable Performances Barely Support a Deeply Taxing Film (LatestLY Exclusive)

The underlying message of Mimi is probably that how in the garb of surrogacy, there are several people who take advantage of women in need of money. There's also the whole plot of foreign couples bailing after they find out that the baby has a disability and what happens to the pregnant girl. All that is great but none of the plots are fleshed out well. The racket behind it all is so half-heartedly touched upon that it's a disservice done to the whole story. When the couple return to claim the kid later and threaten legal action, you would want to see that happen but the story decides to be a cliche.

When the couple leaves without taking the baby, Jaya Bhattacharya, the doctor, suggests that many girls abort the baby when that happens. Mimi decides to keep it because killing a life inside the womb is similar to ending one outside of it. While that's an admirable thought, it doesn't explain if abortion is possible at that stage. She looked too far along in her pregnancy to get it aborted. Also, Mimi's argument for abortion seems uncalled for, especially for women who want to abort unplanned pregnancies. Pro-lifers will rejoice but it dismisses some legitimate reasons for not keeping a baby. Filhal and Chori Chori Chupke Chupke did a much better job at it. Mimi: After Being Leaked on Torrents, Kriti Sanon’s Film Releases Early; Streaming Now on Netflix

The adoption concept in this movie is more of an afterthought than a thought-out subplot. The movie ends with two lines of information about adoption in a story that harped about surrogacy for the entire duration. It looks like the director got confused by the end as to what they want to project. Plus, adoption is a long winding process. How did the couple swiftly managed it all?

India is highly racist. Our obsession for fair skin can put even white Americans to shame. Mimi tries to broach that idea here and Pankaj Tripathi does a swell job at punning on it too but then nothing happens. It's just a passing reference. Such indifference to one of the most popular discriminatory behavior of Indians seems gravely unfortunate.

Women in the Muslim world

Saie Tamhankar's Shama could have been a wonderful contrast to Mimi's life. The latter's parents have always been on her side irrespective of every wrong decision she made. Shama's father on the other hand is highly conservative and the only way we found that out is when Shama says she is prohibited from going to the Masjid. When we are introduced to her father, he seemed like a fairly accomodating person. So where's the conflict?

Here's a request to filmmakers who think jamming a film with social issues will make it relatable. If you do decide to include a few in your story, do justice to them. These are social evils that need to be talked about and shamed. Not used for reactions!

(The above story first appeared on LatestLY on Jul 27, 2021 12:34 PM IST. For more news and updates on politics, world, sports, entertainment and lifestyle, log on to our website latestly.com).