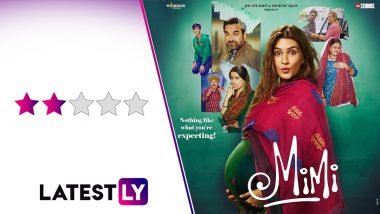 Mimi Movie Review: Mimi is a social drama that is directed by Laxman Utekar, based on a screenplay written by the director and Rohan Shankar. Kriti Sanon is the main lead, playing the titular character, while Pankaj Tripathi, Saie Tamhankar, Manoj Pahwa Supriya Pathak, Evelyn Edwards and Aidan Whytock form the supporting cast. AR Rahman is the music composer, Akash Agarwal is the cinematographer and Manish Pradhan is the editor. Mimi: After Being Leaked on Torrents, Kriti Sanon's Film Releases Early; Streaming Now on Netflix.

Mimi (Kriti Sanon) is a performer based out of Rajasthan, who aims to be a Bollywood actress, but doesn't have enough money to do a photoshoot with Daboo Ratnani. The opportunity to earn some comes through Bhanu (Pankaj Tripathi), a tourist car driver, who is presently chauffeuring for an American couple, Summer and John (Evelyn Edwards and Aidan Whytock). The couple is looking for a 'healthy' woman to be a surrogate for their child, and their sights are trained on Mimi, whose dance performance was enough for them to think so. Don't ask why.

With the promise of Rs 20 lakhs as the rental price for her womb, Mimi agrees to do so after some hesitancy. She lies to her parents (Manoj Pahwa and Supriya Pathak) and stays with her friend Shama's (Sai Tamhankar) house, with her and Bhanu acting as a married Muslim couple. Certain complications about the unborn child, however, force the American couple to backtrack on their promise of taking it away with them, forcing Mimi to be a single mother.

Mimi is based on the 2011 Marathi film Mala Aai Vhhaychy!, which went to win a National Award. I have not seen the Marathi film, so I am not sure how faithful Mimi is to its original. Though I believe the humour of the remake is an added feature. I have, however, seen Mala Aai Vhhaychy!'s 2013 Malayalam remake, Lucky Star, which was also lighter in tone and had a similar narrative.

All the films deal with the themes of surrogacy, and how the practice has seen some very abusive measures in the country, like couples backing out after getting their surrogate pregnant. Mimi begins with some kind of shelter home, whose caretaker calls up the American couple and tells them that he has new girls in stock to be their surrogate. It is definitely an intriguing start, a shocking insight into how surrogacy is becoming a seedy business in the country. The wife tells her husband how malnourished and weak the women were at that 'home' and I believed then that Mimi might explore this further.

That idea isn't lost when a doctor (Jaya Bhattacharya) tells Mimi of how in their aim to have the perfect child, foreigner couples run away when they realise that the baby that would be born might have deficiencies. But if you expect Mimi to delve deeper into this social issue, you may come out disappointed. For the movie might touch upon sensitive topics like surrogacy, single motherhood, abortion, colour discrimination etc, it's handling of these subjects leave a lot to be desired.

But I will come to that in a moment. Was Mimi a bad film? No, and there's the issue. It has some wonderful actors in the cast and all give good performances in their roles. Mimi could be Kriti Sanon's finest performance to date; nailing the complexities of the situations affecting her character really well. Pankaj Tripathi's deadpan humour is put to some great use here, he almost runs away with the entire film till we realise that his character lost its essence to the storyline scenes ago. Manoj Pahwa, Sai Tamhankar, Supriya Pathak all deliver the goods required in the histrionics department. Even Evelyn Edwards and Aidan Whytock put in good performances despite their deeply flawed roles.

The problem is, the writing around their characters doesn't support their performances. It's hard to sympathise with the American couple after what they do to Mimi, even if the movie mentions the wife trying to commit suicide. We don't really know how Bhanu manages to stay away from his real family for so long, till the movie realises this faux pas and uses his family for a scene of comic mirth (that only ends up putting an inconsistent tone to the movie after going serious a couple of scenes back). I don't know what Shama's deal is in the film, other than a couple of throwaway lines about her being ditched by her husband and that her father doesn't allow her to go in a masjid. Also, I am pretty clueless as to why Mimi needs to tell her parents falsity about the parentage of her unborn child when the truth would have done the same damage. Kriti Sanon Birthday: Mimi, Bachchan Pandey, Adipurush, Bhediya - Know All About The Actress' Upcoming Films.

More annoying, however, is the film's address of certain themes, including the main one. Pro-lifers would be quite happy with Mimi's take on abortion when she tells that killing a foetus in the womb is akin to murdering someone outside. Why that line was not needed, I am unsure, since at that point, Mimi was heavily pregnant and could have been way beyond aborting, and that could have been kept the reason for not using that step. Or purely keeping it as her choice to do so (though then why would she trash her room in despair after that scene would come as confusing). In circumstances other than these, Mimi's stance on abortion comes across as flawed messaging for those women who don't want to keep their unplanned pregnancies.

Similarly irritating are the characters in Mimi shown being obsessed with fair skin. For the sake of comedy, we see Bhanu being trolled over his looks when people think he has married Mimi. Later, when the baby is born, the fairness of the kid (and that it is a boy) make Mimi's parents forget all their animosities. Yes, Bhanu makes a joke about the country's fair-skin fixation, but the addressal of this theme doesn't go beyond that joke. What if the couple who hired Mimi's womb would have been African-American? Or just another Indian couple? How would the film would have seen this narrative change?

Look, I know looking at a film politically always brings down the other aspects of the movie. Even if I set aside my political differences about Mimi, the film still doesn't leave a needful impact on me as a viewer. The first half of Mimi is quite breezy with the use of humour, and the smooth chemistry between Sanon, Tripathi and Tamhankar. The second half brings Mimi down, as it is tonally inconsistent, keeps dragging and is predictable in many places.

The return of Summer and John in the third act to reclaim their child should have brought an interesting turn of events. A threat to take a legal discourse could have helped the film address the malpractices of surrogacy in a better way. However, the makers, in turn, choose a very absurd and convenient route to close the tension, which makes me wonder why this was never the solution in the first place!

I agree that there are some aspects that Mimi takes a fresh stand (at least when it comes to Bollywood). Surrogacy is a topic rarely addressed in a mainstream Hindi film, with rare examples being films like Chori Chori Chupke Chupke and Filhaal.

The idea of Mimi being a single mother in a small town was a gutsy take. But it comes at the cost of her dropping her aspirations, and being stuck at where she was before. Yeah, Mimi's Bollywood contact looked shady enough, and the baby's birth might have saved her from getting in bigger trouble, so motherhood is always the best choice for women, right? Well, do see Sara's, the Malayalam film that came out earlier this year, and then make your choice. Sara’s Movie Review: Anna Ben’s Fine Act Uplifts This Important Conversation-Maker on Women’s Crucial Role in Family Planning.

Or see Filhaal, that handled surrogacy in a more nuanced way, save for singer Palash Sen's awful acting debut!

As for music, the great AR Rahman continues his disappointing recent run, with none of the songs registering the kind of magic usually associated with his soundtracks. In fact, one of the songs "Hututu" feels quite similar to "Tum Bin Bataye" from Rang De Basanti.

PS: I also found it 'fresh' for the film's heroine to not take a cliched route, and have a crush on Ranveer Singh instead of Shah Rukh Khan. Though in the end, she names her kid 'Raj'! That could sum up the film's entire inconsistent stand.

- A Breezy First Half

- Film's Flawed Handling of Its Topics

Mimi could be seen as a tribute to 'motherhood', but its handling of surrogacy, unwanted pregnancy and colour fixation will leave you appalled. The family audience might take in with humour and the emotional play, however, there is no denying that some of the movie's stances are outdated, to say the least. Mimi is streaming on Netflix.

(The above story first appeared on LatestLY on Jul 27, 2021 09:26 AM IST. For more news and updates on politics, world, sports, entertainment and lifestyle, log on to our website latestly.com).