Vidya Balan's Sherni is all set to release on Amazon Prime Video on June 18. And so, from Mr. Natwarlal to Roar, we list five other Bollywood films that also saw Tiger as the key character. Watch videos. 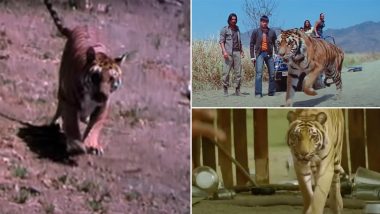 Bollywood has time and again made movies that see animals as the key character. Be it a pet dog, an elephant to even a tiger, there have been films where the plot in a way revolves around these four-legged beings. Now, with Vidya Balan's upcoming release Sherni on Amazon Prime Video, we can expect some scenes where the largest member of the cat family will roar and how. While there is still a day for Balan's film to release online, we thought of listing five movies from Bollywood where Tigers played prominent roles. Sherni Movie: Review, Cast, Plot, Trailer, Streaming Date and Time of Vidya Balan’s Film Releasing on Amazon Prime Video!

Mr. Natwarlal features Amitabh Bachchan and Rekha in the leads. In the movie, there is a particular scene when Mr. Natwarlal (Big B) comes to the rescue after a gangster named Vikram terrorises the villagers using a tiger. Watch.

Helmed by Mahesh Bhatt, this film was one of a kind. Rahul Roy as Vikram plays the role of a protagonist, who gets attacked by a cursed tiger. This incident leads to something unexpected, where Roy himself turns into a tiger every full-moon night.

Produced by Shah Rukh Khan, Gauri Khan, and Karan Johar, this movie revolved around how a wildlife expert and a few tourists team up to eliminate a ghost from the village. There are multiple scenes featuring the tiger and the below video is one of them. Sherni Teaser: Vidya Balan Gives A Sneak Peek Into The World Of A Tigress (Watch Video).

Helmed by Sajid Khan, this film's most highlighting scene is when the hero Ajay Devgn fights with the Tiger to save the villagers along with including the lead actress Tammannaah Bhatia.

A team of commando enters the jungle in search of a white tigress after she kills a man. However, they do not realise that it is impossible to fight the wild even with weapons and that is how the hunter becomes the hunted. Watch.

That's it, guys! Before Vidya Balan's Sherni, these are the Hindi films that featured tigers. However, the thing to note is that in Sherni trailer we have yet not seen a glimpse of a tiger/tigress. Well, let's wait and watch. Until then, stay tuned!

(The above story first appeared on LatestLY on Jun 17, 2021 01:53 PM IST. For more news and updates on politics, world, sports, entertainment and lifestyle, log on to our website latestly.com).