Vidya will be seen playing the role of an upright Forest Officer in Sherni. The story of this Amazon Prime Video film revolves around her who strives for balance in a world of man-animal conflict. Read on. 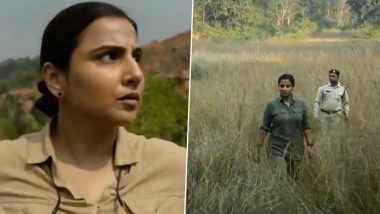 Bollywood actress Vidya Balan is all set to roar with her upcoming film Sherni. Helmed by Amit V. Masurkar and produced by T-Series and Abundantia Entertainment, the movie is ditching its theatrical release due to the pandemic and releasing on the OTT platform. Sherni happens to be the actress's second digital release after Shakuntala Devi. In her latest film, fans will get to see Vidya in a never-seen-before role that will encourage one and all. Right from the teaser to the trailer, Sherni has until now received a great response from the audience. Sherni Trailer: Vidya Balan’s Forest Officer Tries To Tackle Natural and Man-Made Obstacles in this Amazon Prime Video Film (Watch Video).

However, just in case, you want to read or are unaware of Balan's latest project, fret not, as we've got you covered. Sherni comes from the director who is known for his critically-acclaimed film Newton. So, here are all things you need to know about Sherni before it releases on Amazon Prime. Sherni Trailer: Five Similarities Between Vidya Balan's Movie And Rajkummar Rao's Newton That We Couldn't Ignore.

Vidya will be seen playing the role of an upright Forest Officer.  The story of Sherni revolves around her who strives for balance in a world of man-animal conflict while also seeking her true calling in a hostile environment. Well, this seems another strong female character for the actress.

Here's the trailer of Sherni.  Vidya Balan on Her Role in Sherni: I Play a Woman of Few Words but Many Dimensions.

The makers unveiled a song titled Main Sherni. It's a track dedicated to all women who have surpassed the odds and managed to carve a niche for themselves.

When and Where to Watch Sherni Online?

Vidya Balan's Sherni will release on streaming platform Amazon Prime Video. The film will be directly released on the OTT platform on June 18, 2021.

Sherni reviews are not. And we at LatestLY have given the film 2.5 stars and here's our review. Stay tuned!

(The above story first appeared on LatestLY on Jun 17, 2021 12:52 PM IST. For more news and updates on politics, world, sports, entertainment and lifestyle, log on to our website latestly.com).