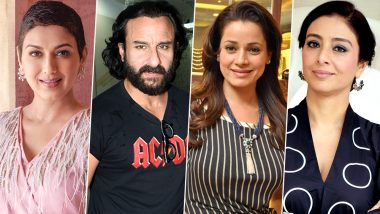 The four actors of Bollywood – Saif Ali Khan, Sonali Bendre, Neelam Kothari and Tabu were acquitted in the blackbuck poaching case. A plea was filed by the government against their acquittal by a CJM court in the said case against these celebs’ and Dushyant Singh. According to the latest reports, the Rajasthan High Court has issued a fresh notice to the four actors over their acquittal, reports ANI. It is also stated that the hearing will take place after eight weeks. Blackbuck Poaching Case: Saif Ali Khan, Sonali Bendre, Neelam Kothari, Tabu Issued Notice by Jodhpur High Court After State Government Challenges Their Acquittal.

Last year the Rajasthan government had filed a plea against the acquittal of four Bollywood actors and the local Dushyant Singh. The blackbuck poaching incident took place in 1998 when the above mentioned four actors and Salman Khan (during the shoot of Hum Saath Saath Hain) went on a late night hunt. Salman allegedly killed two blackbucks, the species of deer that is in the endangered species of animal in the country. Salman Khan’s Appeal Against Blackbuck Poaching Case Verdict to Be Heard on April 3.

Blackbuck poaching case: Rajasthan High Court sends fresh notice to Saif Ali Khan, Sonali Bendre, Neelam, Tabbu and Dushyant Singh on a plea filed by the government against their acquittal by a CJM court. Hearing to take place after 8 weeks.

Salman Khan was found guilty and was also charged under Section 51 of the Wildlife (Protection) Act and others under Section 51 read with Section 149 (unlawful assembly) of the Indian Penal Code. The actor was later granted bail and he also challenged the verdict. Stay tuned for further updates.

(The above story first appeared on LatestLY on May 20, 2019 10:08 AM IST. For more news and updates on politics, world, sports, entertainment and lifestyle, log on to our website latestly.com).