Bombay Begums, starring Pooja Bhatt, Amruta Subhash, Shahana Goswami and others streams on Netflix. The critics are a bit divided on how they found the web series. Some believe the characters needed more nurturing while others are of opinion that it tackles the story well. 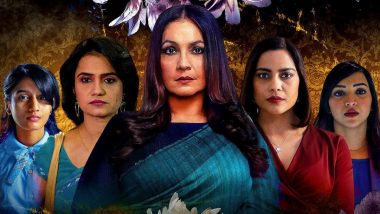 On International Women's Day today, a lot of content has been designed to cash in on the craze. Bombay Begums is one such webseries that started streaming today on Netflix. A story of four women and their journeys to become queens of their own world. Alankrita Srivastava has mastered the art of picking stories that take a woman's story further and make them commercially rich. Lipstick Under My Burkha and Dolly Kitty Aur Chamkate Sitaarein did just that. Bombay Begums takes the narrative of oppressed women deciding to get back further. But critics didn't find it as pleasing as the story suggests. Bombay Begums Director Alankrita Shrivastava Says Making Women-Oriented Films Is Not Easy in Bollywood

Many believe that Alankrita's storytelling is a trainwreck while some are of the view that her Bollywood-isation of stories don't let the story flourish on their own. Check out some reactions from the critics.

News18: Bombay Begums is a classic example of letting go of good opportunities in the name of sticking to the theme. Just when the audiences begin to feel a connection with the show, it changes track. The six-episode show loses steam within the first two episodes and then keeps beating around the bush for the rest of it.

Indian Express: There have been ambitious women in the movies and TV shows before, so it isn’t exactly virgin territory that ‘Bombay Begums’ treads. But where it scores is in its decision to create full-bodied female characters who refuse to be likeable, or to conform. And in the way, it shows us just how much women themselves are complicit in maintaining the status-quo, once they reach a certain position.

Hindustan Times: Bombay Begums isn’t a show about men and women; it’s a show about power, and the extent to which certain people are willing to go, regardless of their gender, to hold onto it. It isn’t an absolute train wreck like Shrivastava’s previous Netflix release, Dolly Kitty and Woh Chamakte Sitare — a superficial examination of serious issues — but there’s still an element of preachiness to the proceedings. It's inelegant, but empowering in its own way.

NDTVMovies: Bombay Begums rides on a clutch of top-notch performances, not the least by Pooja Bhatt, making a comeback. She slips into the skin of the conflicted Rani without missing a trick. Amruta Subhash, splendidly uninhibited, is a consummate scene-stealer. Shahana Goswami tackles a complex role with striking acuity, conveying gentility and assertiveness with equal flair.

(The above story first appeared on LatestLY on Mar 08, 2021 02:26 PM IST. For more news and updates on politics, world, sports, entertainment and lifestyle, log on to our website latestly.com).