The first film was a landmark hit in the careers of all involved, so what happened to the sequel? So here are what we believe are the five reasons why Bunty Aur Babli 2, also starring Siddhant Chaturvedi, Sharvari Wagh and Pankaj Tripathi, is not turning out to be the hit that YRF wanted it to be, despite the best efforts of its stars. 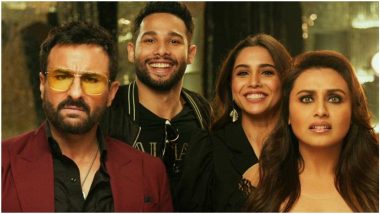 Well, Bunty Aur Babli 2 might end on a sequel tease, but there is very low probability that we might see it go into third installment. The sequel to the 2005 hit produced by Yash Raj Films, Bunty Aur Babli 2 had released in India by YRF on November 19 in theatres. The first Bunty Aur Babli was directed by Shaad Ali, which was his last bonafide hit at the box office, while the sequel is directed by Varun V Sharma. While Rani Mukerji returns to play Babli aka Vimmi, Abhishek Bachchan is replaced by Saif Ali Khan who plays Bunty aka Rakesh. Bunty Aur Babli 2 Box Office Collection Day 3: Rani Mukerji, Saif Ali Khan’s Comedy Film Makes Minimal Growth, Earns Rs 8.30 Crore.

Siddhant Chaturvedi and Sharvari Wagh play the younger con couple in the movie, that also has Pankaj Tripathi play a cop chasing after them. Bunty Aur Babli 2 has opened to a very cold response both with the critics and the box office. The first film was a landmark hit in the careers of all involved, so what happened to the sequel? COVID-19 can't be blamed, for Sooryavanshi is still doing great business (more on it ahead). So here are what we believe are the five reasons why Bunty Aur Babli 2 is not turning out to be the hit that YRF wanted it to be, despite the best efforts of its stars.

Let's say it as it is. Replacing Abhishek Bachchan with Saif Ali Khan was a huge, huge mistake. Saif Ali Khan is a wonderful actor and he does good in the role. Abhishek might not be the box office draw that he used to be back in 2005. Yet, Bunty was Abhishek for many of the movie's fans, and his presence is sorely missed throughout the movie, especially in the scenes that delve into Rakesh and Vimmi's marriage. Even the fantastic Pankaj Tripathi couldn't fill in the absence of Amitabh Bachchan from the earlier film. Bunty Aur Babli 2 Movie Review: Rani Mukerji, Saif Ali Khan, Siddhant Chaturvedi, Sharvari Wagh Add Infectious Charm to This Feeble Con-Game.

Need of a Chartbuster Soundtrack

A huge factor in the success of Bunty Aur Babli was Shankar-Ehsaan-Loy's chartbuster soundtrack. With the help of Gulzar's effervescent lines. songs like the title track, "Kajraa Re", "Nach Baliye", "Chup Chup Ke" were instant hits with the listeners. For Bunty Aur Babli 2, SEL returns and gives a decent soundtrack, with "Luvju" being a highlight more for the chemistry between Siddhant and Sharvari and the visuals than for the song itself. But it isn't as impactful as what the composer trio scored for the predecessor. For BB2 to click with the audience even more, it desperately needed a track on the same level as "Kajraa Re".

Humour Doesn't Work in A Loose Narrative That Lacks Polish

It isn't that good movies are the ones that always work at the box office. But when the crowd-pulling factors are compromised, we have to get analytical with the material. Bunty Aur Babli 2 is surprisingly critical of the India Shining project, and shows how things haven't changed for common people despite the incessant promises of Vikas. But the movie lacks the wit to pull off the razoe sharp satire that was needed here. The humour occassionally works, because of the actors involved and not much due to the strength of the material here. Even the direction feels raw in places, and the movie adapts a loud tone that gets irritating.

While all the leads have given good performances and are popular stars, they ain't in the prime form of box office power. In such a case, it is important for Bunty Aur Babli 2 to earn good reviews and work on word of mouth, especially when the IP itself is being compromised (see point 1). Look at how Rani's last couple of movies - Hichki and Mardaani 2 - fared decently at the box office, thanks to a good word of mouth campaign. Unfortunately for Bunty aur Babli 2, the movie has got middling reviews, and the WOM from public ain't flattering. Bunty Aur Babli 2 Movie Review: Rani Mukerji, Saif Ali Khan, Siddhant Chaturvedi, Sharvari Wagh's Film Fails To Make A Mark.

Bunty Aut Babli 2 really can't blame audience hesitancy to come to theatres, when Sooryavanshi  is still going strong in its third weekend. On Sunday that is November 21, BB2 made about Rs 3.20 crore (total net: Rs 8.30 crore in three days), while the Akshay Kumar-starrer made Rs 5.33 crore (total net:  Rs 178.60 crore). So audiences are still preferring Rohit Shetty's masala entertainer over a new release, despite Sooryavanshi getting flak for its problematic depiction of Muslim sentiments.

(The above story first appeared on LatestLY on Nov 22, 2021 03:07 PM IST. For more news and updates on politics, world, sports, entertainment and lifestyle, log on to our website latestly.com).