For the uninitiated, the film is based on the real-life incident of acid attack survivor Laxmi Agarwal. She faced brutal acid attack at the age of 15 by a guy named Nadeem Khan (also known as Guddu), for rejecting his marriage proposal. 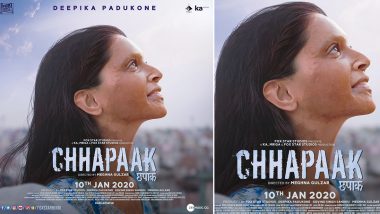 Deepika Padukone is right now in the spotlight due to different reasons. She has been extensively promoting her film, Chhapaak which is releasing on January 10. However, her presence at Jawaharlal Nehru University (JNU), was the hottest talk of Twitter. Her stance to stand in solidarity with the students of JNU has sparked controversy. As if this reason was less for the actress to be one of the top trends currently, there is another controversy lined up. As per the reports, the makers have changed the name of acid attack survivor Laxmi Agarwal's assailant Nadeem Khan's name to Rajesh in the film. Anurag Kashyap Changes Twitter DP to Deepika Padukone's Pictures From JNU To Appreciate Her Stance.

For the uninitiated, the film is based on the real-life incident of acid attack survivor Laxmi Agarwal. She faced brutal acid attack at the age of 15 by a guy named Nadeem Khan (also known as Guddu), for rejecting his marriage proposal. In Chhapaak, the makers have kept Deepika's character's name as 'Malti' and the acid attacker's name as 'Rajesh'. However, the trolls objected changing a Muslim man's name to a Hindu-sounding name and hurled their nasty comments.

How is Deepika Padukone respecting Laxmi if she can't even use the real attacker's real name in Chhapaak ?

Angst Over the Name Change

One More Calling For the Boycott

How how how????From NADEEM KHAN TO RAJESH OR RAKESH....from "MUSLIM TO HINDU".....if your movie is based on true events then why would you change the RELIGION OF ACID ATTACKER....FEELING SORRY FOR THE PEOPLE LIKE YOU.#boycottchhapaak pic.twitter.com/7KftqxAhsq

Troll On The Name Change

@deepikapadukone #Chappak is based on the real life events then why did you change the name of the culprit from Nadeem Khan to Rajesh..why didn't you guys have guts to show the real name on screen..shame on you people..😠

I was going to watch chhapak....but now I will go for TANAJI

What if bollywood make movie on 9/11... will they rename osama bil laden as om bhatt??

Some also targetted director Meghna Gulzar for changing the name of the character. However, the makers have changed the names of all the characters in the flick including Vikrant Massey's character who plays her husband Alox Dixit as Amol. No one from the Chhapaak team has commented on the flak yet.

(The above story first appeared on LatestLY on Jan 08, 2020 01:47 PM IST. For more news and updates on politics, world, sports, entertainment and lifestyle, log on to our website latestly.com).