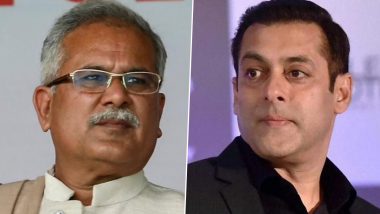 During his meeting with the actor, Gaurav telephoned the Chhattisgarh Chief Minister who asked the Bollywood heartthrob to visit the state and explore locations for shooting films. Salman Khan Croons Lata Mangeshkar’s Iconic Song Lag Ja Gale And Pays An Heartwarming Tribute To The Late Singer (Watch Video).

"I had deep discussion with actor Salman Khan regarding the new film policy of Chhattisgarh. I explained that there is enormous scope of shooting here at CG because the state has rich natural locations. Actor showed his interest to visit here with some shooting plans in future," CM Adviser Dwivedi said.

Salman and Katrina were shooting for Tiger 3 in the national capital. The upcoming action thriller has been majorly shot across several countries including Turkey, Russia and Austria. Helmed by Maneesh Sharma, the movie also stars Emraan Hashmi. In, Tiger 3, Salman will reprise his role of RAW (Research & Analysis Wing) agent Avinash Singh Rathore aka Tiger, while Katrina will be seen as Zoya.

(The above story first appeared on LatestLY on Feb 19, 2022 03:34 PM IST. For more news and updates on politics, world, sports, entertainment and lifestyle, log on to our website latestly.com).