Abhinay Deo's directorial, Delhi Belly completes 10 years on July 1. And so we thought of bringing some facts about the adult comedy which you were unaware of. Read on. 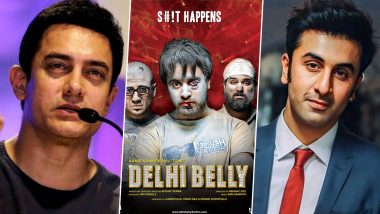 July 1 marks 10 years of Delhi Belly. One of the most popular adult satire films made in India, this one features Imran Khan, Vir Das, Kunal Roy Kapoor, and Vijay Raaz in key roles, and is helmed by Abhinay Deo. The best part about this flick is that it's unfiltered which is why it is still relevant. DB also performed well at the box office and turned out to be super successful among the masses. Bankrolled by Aamir Khan, do you know that Mr, Perfectionist and Ranbir Kapoor were supposed to be part of Delhi Belly?  9 Years of Delhi Belly: Vir Das Reminisces His Film with Imran Khan and Kunaal Roy Kapur, Shares ‘Bhaag DK Bose’ Song.

The director of the film spilled the goss while talking to Zoom Digital and said, "Some of the facts about this film are (that) Aamir Khan wanted to play Nitin's character, like the character that Kunaal Roy Kapur played, Aamir wanted to play that character." Imran Khan Birthday: Jaane Tu... Ya Jaane Na, Delhi Belly, Kidnap - 5 Entertaining Films of the Actor That Make Us Question His Decision To Quit Acting!

Speaking of Ranbir Kapoor, as per DNA, a close source told the portal, “We had finalised Ranbir for the film but things didn’t work out and so he’s no longer a part of the project." There is not much time left for us to finalise another person for the role since we start shooting in two months maximum. We were happy with Ranbir coming in but you know sometimes things don’t work out. Stars are busy with dates and sometimes something else comes up. We have to get someone fast."

Reports during that time also made rounds that RK backed out of the film due to its adult content. Well, that was little 'did you know' from Delhi Belly. Hope you liked it. Apart from the star cast and terrific storyline, the movie also had some kickass songs like Bhaag DK Bose, Switty Switty Tera Pyaar Chaida, Bedardi Raj, which still fan favourites. Stay tuned!

(The above story first appeared on LatestLY on Jul 01, 2021 03:01 PM IST. For more news and updates on politics, world, sports, entertainment and lifestyle, log on to our website latestly.com).