Ellen DeGeneres celebrates her birthday today and so, we thought we rewind to some of the episodes which Indian celebrities having fun on the show. There's of course, Priyanka Chopra talking about Quantico and Nick Jonas, Deepika Padukone gushes over her imaginary babies with Vin Diesel, Kunal Nayyar spoke about The Big Bang Theory and much more. 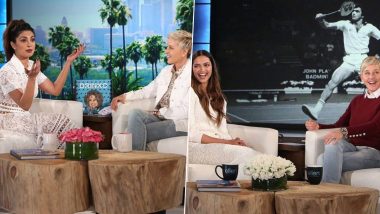 Ellen DeGeneres has toiled hard to be where she is now and that's why The Ellen DeGeneres Show is a raging hit. In fact, it is seen as a sign that you are a global sensation if you feature on her show. Many Indian celebrities have made it to her show and made the nation proud. The show sees Ellen speak to people from various walks of life, from any part of the world. She adds a lot of wit and humour to her interview questions. Even the games she plays with these celebrities become a rage. Ellen DeGeneres Opens Up About Her Battle with COVID-19, Says ‘Doctor Put Me on Pain Pills and Muscle Relaxers’

We all know about Priyanka Chopra and Deepika Padukone's debut on the show. PC even warmed Ellen's couch twice. But there are lot many other desi celebs who appeared on a show for a quick tete-a-tete with Ellen. So on her birthday, let's check out all those episodes.

The first time PC went to the Ellen show it was a huge deal as no Bollywood star have ever managed that feat. Both had a fun time and did some shots challenge too. Ellen however got criticised for the way she behaved with Priyanka so when the latter came on her show again after her big fat Indian wedding to Nick Jonas, Ellen managed to avoid any controversy whatsoever.

We all remember the cute, chubby kid from India's Got Talent who dances like a dream on the show. He was featured on the show where he also performed. Ellen was seen having super fun watching Akshat dance. She even gave him a little gift.

Kunal Nayyar or the dorky and introverted Rajesh Koothrapali from The Big Bang Theory has been on Ellen's show several times and each one of them were fun episodes as his bonding with Ellen is quite refreshing. Here's one example of that.

Padma Lakshmi too graced the show on many occasions and even cooked with Ellen.

Ellen Degeneres is one of the most respected talk-show hosts not only in the US but in India as well. The videos above are proof.

(The above story first appeared on LatestLY on Jan 26, 2021 09:20 AM IST. For more news and updates on politics, world, sports, entertainment and lifestyle, log on to our website latestly.com).