As hit romantic film Chalte Chalte has clocked 17 years, actor Rani Mukerji on Saturday remembered shooting for the film with megastar Shah Rukh Khan and said that the film is one of her favourites. 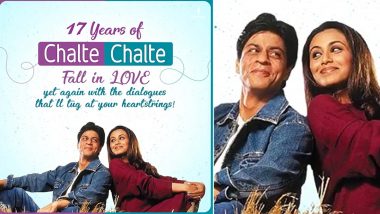 New Delhi [India], June 13 (ANI): As hit romantic film Chalte Chalte has clocked 17 years, actor Rani Mukerji on Saturday remembered shooting for the film with megastar Shah Rukh Khan and said that the film is one of her favourites. "Working with Shah Rukh has been one of my favourite things! It was Shah Rukh's production and it was the first time I had visited Greece, Mikonos, and Athens which is a fun memory for me. The beautiful blue and white houses was a landscape which I had not seen before," said Mukerji. Kuch Kuch Hota Hai Completes 21 Years: Karan Johar Thanks Fans For Pouring Love on His Shah Rukh Khan-Kajol-Rani Mukerji Starrer Film.

"The island was just amazing to stay and shoot. Athens also has such stunning architecture, such heritage, so many things which speak of history! We had a very nice outdoor during Chalte Chalte," she added. The 42-year-old actor gave India the big trend of smokey eyes through Chalte Chalte and she credits celebrity make up artist Mickey Contractor for his vision to create something completely new and stunning for her. Rani Mukerji Salutes Mumbai Police for Their Work Amid Pandemic in New Song Video ‘Rakh Tu Hausla’, Says ‘Their Bravery, Sacrifice, and Service Will Be Remembered for Years to Come’.

"I remember smokey eyes becoming a huge rage during the release and everyone kind of adopted that style of makeup. Mickey and me today also chat about it and he says that Rani had you not trusted me with doing those eyes for you, the look probably would have come much later," the Mardaani actor said. "I am so glad that I went ahead and the makeup in Chalte Chalte has always been one of my favourites ever and smokey eyes became something that was very synonymous with," Mukerji added. Rani Mukerji Birthday Special: A Sabyasachi Muse; Their Bong Connection Working Like Magic, One Resplendent Ensemble at a Time!.

Speaking about working with superstar and her close friend Shah Rukh Khan, Mukerji said, "It was a Red Chillies production and we were looked after humongous because Shah Rukh always kind of goes out of his ways to make his unit member and actors very comfortable and I have had a great association with Red Chillies whether it's Chalte Chalte or Paheli."

"It's one of the best production houses. I really miss working with Shah Rukh's production because he takes such special care," she added.

Chalte Chalte is one of the most well-received films of both Khan and Mukherji's career. The romantic drama with its soothing music continues to win hearts even after 17 years of its release.