Gangubai Kathiawadi Teaser Review: Alia Bhatt Is the Queen of Kamathipura but Will She Be Able to Rule the Audience? (Watch Video)

The narrative walks through the life of young Ganga who in no time marks her own territory and becomes Gangubai. With a promise to make one and all feel inspired in 2021 as Gangubai Kathiawadi celebrates the journey of a girl who became the voice for women empowerment. 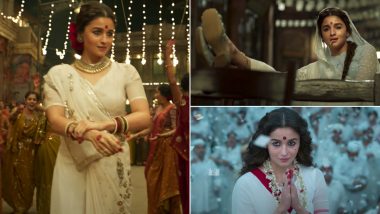 Alia Bhatt's much-anticipated project with Sanjay Leela Bhansali titled Gangubai Kathiawadi has been the talk of the town ever since its inception. Bhatt, who we have seen essay a range of roles till now, is all set to entertain her fans in a new avatar once again in the SLB film. Fans were excited to see the actress embody the 'Godmother' of the infamous brothel area in Mumbai known as Kamathipura on the big screen. On the occasion of SLB's birthday, the makers of the film have also shared the first glimpse of Alia's film. Gangubai Kathiawadi Teaser: Is the BGM Score for Alia Bhatt’s Sanjay Leela Bhansali Film Inspired by Marvel’s Black Widow?

The one and a half minute long teaser is all about Sanjay Leela Bhansali's magic mixed with some stellar acting by Alia Bhatt. We are introduced to Gangu, a simple girl from Kathiawad who embraces her life as it is and rises to power, fighting her destiny. Alia Bhatt is delivering some really powerful dialogues in the teaser, and we love her on-point portrayal of a brothel owner who knows power is everything.

While Alia's character sure looks impressive, we think her innocent face is not doing justice to the grandness of the real-life matron of Kamathipura. No matter how hard she is trying, we fail to see the sharpness that the character demands in the film. We cannot wait to see if she will indeed manage to dazzle the audience in theatres or not. Apart from this, Sanjay Leela's sets are looking magnificent as ever and the background music is an added bonus for the audience. It’s Alia Bhatt VS Prabhas! Gangubai Kathiawadi And Radhe Shyam Set To Clash At The Box Office On July 30.

The synopsis of the movie reads, "Gangubai Kathiawadi - A story, based on the book “Mafia Queens of Mumbai” written by S. Hussain Zaidi, is a film that celebrates the rise of a simple girl from Kathiawad who had no choice but to embrace the ways of destiny and swing it in her favour. The narrative walks through the life of young Ganga who in no time marks her own territory and becomes Gangubai – The Matriarch of Kamathipura. With a promise to make one and all feel inspired in 2021 as Gangubai Kathiawadi celebrates the journey of a girl who became the voice for women empowerment."

Helmed by Sanjay Leela Bhansali, Gangubai Kathiawadi marks the first collaboration between him and Alia. This project will also see Bhansali Productions collaborating with Jayantilal Gada's Pen India Limited. The film is slated to hit the theatres on July 30, 2021.

(The above story first appeared on LatestLY on Feb 24, 2021 05:28 PM IST. For more news and updates on politics, world, sports, entertainment and lifestyle, log on to our website latestly.com).