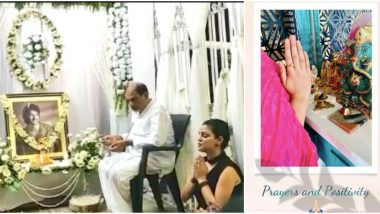 Sushant Singh Rajput's death still seems difficult to digest and with all that's going on relating to his case, the late actor's family recently announced that they will be holding a global praying session on the two-month anniversary of his death. Sushant died by suicide on June 14, at the age of 34. While netizens have been praying for the late actor and had even got the hashtag 'Global Prayers For SSR' trending. The actor's sister Shweta Singh Kirti, Ankita Lokhande and Kriti Sanon took to social media to share posts on the same. RIP Sushant Singh Rajput: Ankita Lokhande Joins Shweta Singh Kirti's Campaign of International Prayer Meet For Late Actor.

Sushant’s sister, Shweta Singh Kirti, shared a video of a prayer service being held at their family home in Patna, Bihar. The video also features Sushant's father KK Singh. The actor's family is seen chanting Maha Mrityunjaya mantra in the video. Sharing the same, Sushant's sister wrote, "Please post a pic of yours with folded hands and join the campaign #GlobalPrayers4SSR today." Also sharing a post on the same, Kriti Sanon posted a picture with folded hands and wrote, "Because its always a good time to pray.. Sending out Prayers and Positivity. May the truth shine soon.. Today, this independence day, lets also free ourselves from negativity and hate while we stand for our beliefs and for what is right." Check out posts of Ankita Lokhande and Kriti Sanon below. SSR Case: Ankita Lokhande Supports Shweta Singh Kirti’s CBI Demand, Says ‘We Will Find the Truth and Get Justice Di’.

Because its always a good time to pray.. 🙏🏻 Sending out Prayers and Positivity 💛 May the truth shine soon.. ☀️ Today, this independence day, lets also free ourselves from negativity and hate while we stand for our beliefs and for what is right. #jaihind #happyindependenceday #PrayersForSSR #MayTruthPrevail #LoveBeforeHate

Sushant's sister had earlier announced the global prayer meet for her late brother saying, "It has been 2 months you left us bhai and we are still fighting to know the truth, to know what actually happened that day. I request you all to please join us for Global 24-hour spiritual and prayer observation for Sushant Singh Rajput, so that the truth prevails and we find justice for our beloved Sushant."

(The above story first appeared on LatestLY on Aug 15, 2020 01:35 PM IST. For more news and updates on politics, world, sports, entertainment and lifestyle, log on to our website latestly.com).