The film is directed by Vikas Bahl, who has worked with producer Ekta Kapoor in films like Lootera and Udta Punjab. The film also stars South actor Rashmika Mandanna in a key role. 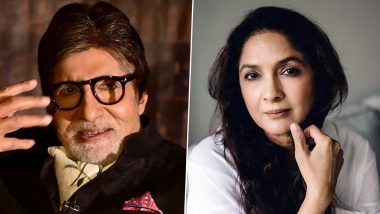 Amitabh Bachchan and Neena Gupta were all over the news last week when they announced their new film together. Titled Goodbye, the film will mark their first-ever collaboration where we will see the duo essay the role of a couple. Bachchan was in awe of Gupta's performance in Badhaai Do and it is being said that after seeing her acting in the Ayushmann Khurrana film, Big B recommended her name to the maker of Goodbye. Yes, it was indeed Bachchan because of whom Neena was cast in the film. Goodbye: Amitabh Bachchan and Rashmika Mandanna To Star Together for the First Time; Shoot Begins.

A source close to Mr Bachchan told Bollywood Hungama, “In recent years he has been progressively feeling the scarcity of co-stars. Actresses like Jaya Prada and Dimple Kapadia have been paired with Bachchan Saab once too often. He needed a fresh co-star, and Neena Gupta seems just what the doctors ordered." The film went on floors last week.

"That time has come now. Mr Bachchan and Neenaji would be the hottest autumnal couple since Clint Eastwood and Meryl Streep in Bridges Of Madison County,” a friend of Mr Bachchan stated. The film is backed by Balaji Telefilms and Reliance Entertainment. Goodbye: Neena Gupta Cast Opposite Amitabh Bachchan as His Onscreen Wife.

Talking about her association with the film, Neena said, "When Vikas narrated the film to me, I was so happy. It is a wonderful script and one doesn't think about anything else, when the script is this exciting." The statement further read, "Even the role is beautifully written and I am very excited to be sharing the screen space with Mr. Bachchan. It is a dream come true for me and I am quite ecstatic about it." The film is directed by Vikas Bahl, who has worked with producer Ekta Kapoor in films like Lootera and Udta Punjab. The film also stars South actor Rashmika Mandanna in a key role.

(The above story first appeared on LatestLY on Apr 08, 2021 12:17 PM IST. For more news and updates on politics, world, sports, entertainment and lifestyle, log on to our website latestly.com).