Staying true to their reel-life personas, Gulabo and Sitabo, Amitabh and Ayushmann indulge in a funny banter to give us an insight into their movie characters. 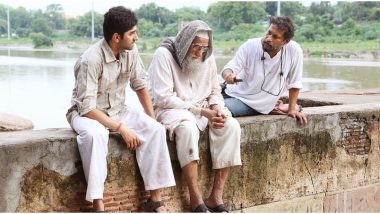 Gulabo Sitabo is already connecting with the masses and you can credit the recent headlines for it. The movie directed by Shoojit Sircar has become Bollywood's first release to have an OTT premiere amid the ongoing coronavirus crisis. The makers decided to ditch its theatrical release and opt for Amazon Prime as its new digital partner. While we have been hearing tons of praises about its trailer, it's time we let you know when you can expect it to come out. Gulabo Sitabo Trailer Preview: 4 Reasons Why Amitabh Bachchan and Ayushmann Khurrana’s Film Looks to Be a Winner!

A new video shared by the film's lead actors shows Amitabh, Ayushmann and Shoojit Sircar having a video con-call where they discuss the film's marketing strategy. But staying true to their reel-life personas, Gulabo and Sitabo, Amitabh and Ayushmann indulge in a funny banter to give us an insight into their movie characters. The video is hilarious and their camaraderie is marvellous. We're definitely looking forward to the film's trailer that drops online on Friday, May 22. From Akshay Kumar’s Sooryavanshi to Ranbir Kapoor’s Brahmastra, 7 Films of 2020 That Should NOT Follow Gulabo Sitabo’s OTT Strategy and Must Release in Theatres – Here’s Why.

Check out the Trailer Announcement Video

You can check the trailer on the official YouTube channel of Amazon Prime Video India. This Shoojit Sircar directorial is a comedy-drama that was shot in Lucknow. Speaking about the film's subject, Sircar in one of his earlier interactions had said, "As soon as I read the script, I shared it with Mr Bachchan and Ayushmann at the same time. I thought it would take some time to develop and take it forward, but everyone was so enthusiastic to work on this script, they figured out their dates and here we are." The film premieres on June 12, 2020.

(The above story first appeared on LatestLY on May 21, 2020 10:28 PM IST. For more news and updates on politics, world, sports, entertainment and lifestyle, log on to our website latestly.com).