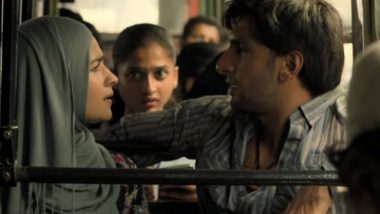 When the first full-fledged trailer of Gully Boy dropped on the internet, one moment from it particularly went viral. In the Ranveer Singh centric trailer, Alia Bhatt stole the limelight with her extra-possessive girlfriend act. She doesn't mind smashing a bottle on the head of the girl flirting with her beau. Now, a new promo shows us just how intense she could be when it comes to jealousy and possessiveness. In the new promo, Alia is a girlfriend straight from every guy's nightmare.

Alia is possessive to the point that she'd use Truecaller to find out who is texting Ranveer. She even questions him why he texted back. After finding out the mystery woman's identity through the app, Alia goes on to call her the woman and ask her location from her. We know what is going to happen next. Ouch. Gully Boy Song Doori: Ranveer Singh’s Intensity Blends Perfectly with the Moving Lyrics – Watch Video.

Gully Boy might be a movie that is entirely hero-centric. But it is good to see that it has also given its female character moments to shine. At least, it seems so. This scene alone looks like a strong one that will be talked about a lot. Thank God, the movie didn't forget to give a strong story arc to its female lead.

Gully Boy is a movie about the rap scene in Mumbai. Ranveer plays a character, inspired by Naezy and Divine, who rises from the streets of Mumbai to immense fame with his rapping. The songs that have come out so far have been some of the best that Bollywood produced in recent times. The soundtrack is the collaborative effort of over 50 artists and features 18 tracks. Gully Boy, directed by Zoya Akhtar releases on February 14.

(The above story first appeared on LatestLY on Feb 04, 2019 11:34 AM IST. For more news and updates on politics, world, sports, entertainment and lifestyle, log on to our website latestly.com).