Happy Birthday, R Madhavan! 5 Times When This Charming Actor Made Everybody To Fall In Love With Him 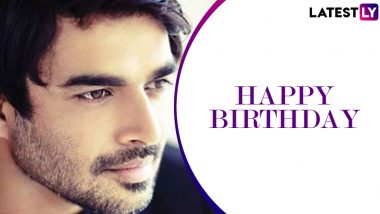 Romance and Madhavan, doesn’t that go hand in hand and that too with absolute perfection? When we talk about love sagas, even today all we could think of is the charming actor of Indian Cinema, R Madhavan aka Maddy (as his fans fondly call him). He has turned 50 and manages to bowl over our hearts even today. This tall, dark, handsome man is still as amazing to watch, just like it was in early 2000. He still has that charm that captivates over us and we clearly don’t think that’s ever going to fade away. R Madhavan Birthday Special: These 17 Pics Prove He Can Still Make Us Go Weak in the Knees!

We all have a favourite actor and some of their favourite roles. But when it comes to R Madhavan, all the roles that he has done in the past, all of them have been our favourite. We really needn’t explain the reason, you know it already! It is not just about the romantic, heart-wrenching scenes that we’re only talking about, there’s a lot more. Besides playing the role of a lover, he has also played some intense roles and that also includes grey shaded characters as well. But that never changed the kind of fondness that we all (especially his female fan followers) have for him. He can make us go weak in the knees. On R Madhavan’s 50th birthday, let’s take a look at those five films, those amazing moments when he made everybody to fall in love with him.

Bollywood movie buffs who have loved Saathiya should know that it was the remake of this movie, Alaipayuthey, featuring R Madhavan and Shalini in the lead roles. This film got him his first major break. There was love, madness, conflict in marriage, too many emotions to handle, but Madhavan as Karthik Varadharajan, pulled it off with absolute perfection.

Rehnaa Hai Terre Dil Mein or RHTDM, every 90s child love it, but talk to any 90s girl, they’re only going to talk about Madhav “Maddy” Shastri. We saw him as a spoilt brat and also a charming lover in this film. And when he falls in love with ‘his kind a girl’ Reena (Dia Mirza), it still makes every girl go awww. Watching Maddy falling in love with Reena, made us all fall for Maddy in real!

Madhavan has won hearts not only in Bollywood, but even down south, and it happened from the time when Alaipayuthey had released. He played the role of a poet named Thiruchelvan in Kannathil Muthamittal, and he just got into the skin of the character that we’d believe it’s for real. But again this film has our favourite moment, the scene where he confesses his love for Indira (Simran) and that will surely melt our hearts.

Like said before, Madhavan is a charming actor and when we saw him as Ajay Singh Rathod, a flight lieutenant in the Indian Air Force in Rang De Basanti, we just couldn’t stop falling in love with this man in uniform. Although it was just a brief appearance that he had in the film, but it won hearts and we still can’t get enough of that surprise proposal scene.

This time we saw him as a journalist named Shyam Saxena, who decides to expose Guru’s (Abhishek Bachchan) increasingly corrupt ways. But more than that, it was his equation with Meenu (Vidya Balan), their onscreen chemistry, the moment when he proposes her, again it turned out to be one of the most memorable moments.

There are so many other roles that R Madhavan has played with sheer perfection and made his characters seem so realistic. There are too many favorite moments, but these five are totally the enthralling ones. Here’s wishing him all the love and a great year ahead. Happy Birthday, R Madhavan!

(The above story first appeared on LatestLY on Jun 01, 2020 12:01 AM IST. For more news and updates on politics, world, sports, entertainment and lifestyle, log on to our website latestly.com).