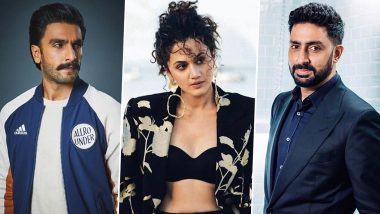 The day was in favour of Australia but Team India managed to win all our hearts. The Harmanpreet Kaur-led young team was defeated by Aussies as they managed to grab their fifth world cup trophy. However, no reason in the world is enough to let your spirit down, right? Despite their defeat, the team has managed to make the country proud and our celebs are sending in some warm wishes to boost their morale. Finding a place in the world cup final is itself a big deal and the celebration of which should never stop. Shefali Verma Consoled by Smriti Mandhana & Others After She Sobs Uncontrollably as India Loses the T20 World Cup 2020 Finals Against Australia (Watch Video).

Taapsee Pannu, Ranveer Singh, Abhishek Bachchan and Virat Kohli led the celeb squad in congratulating our women in blue. The celebs send in their complimenting messages to cheer for our women team and their fight to claim the title. The fact that they went right till the end and put up a fight itself deserves a round of applause and the should be appreciated for it. Check out what our celebs have to say about them. Heartbroken Fans Thank India Women’s Team for Wonderful ICC Women’s T20 World Cup 2020 Campaign, Congratulate Australia for Winning Fifth Title.

Hard luck ladies @BCCIWomen , but we are all still so proud of you!

Congratulations for the 5th time Aussies !!!

Proud of all the efforts put in by the Indian Women's Cricket Team throughout their #T20WorldCup campaign. I'm confident that you girls will bounce back stronger than ever. 🙌 @BCCIWomen

The Indian team was all out at 99 at the hands of seamer Megan Schutt and spinner Jess Jonassen. Nonetheless, such hurdles and defeat always prepare us for a better tomorrow and there's always next time. Till then, let's keep cheering for our women's cricket team.

(The above story first appeared on LatestLY on Mar 08, 2020 08:54 PM IST. For more news and updates on politics, world, sports, entertainment and lifestyle, log on to our website latestly.com).