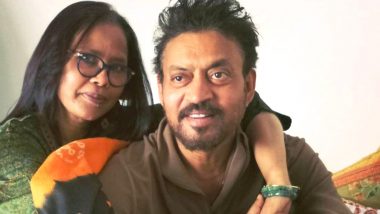 Sutapa Sikdar, wife of late actor Irrfan Khan, has made an appeal for the legalisation CBD oil in India. Sutapa took to her unverified Instagram account on Tuesday to present her viewpoint. Sharing a photograph of the London hospital where Irrfan Khan underwent cancer treatment, Sutapa wrote on Instagram: "London revisit looking at his hospital room from outside like everytime I did while he was there #walkingalone #wishyouwerethere #cancerpain #LegalizeCBDoilinindia." Irrfan Khan’s Son Babil Pens Emotional Note Remembering His Late Father (View Post).

Irrfan passed away on April 29 this year after battling cancer for almost two years. On Monday, singer Sona Mohapatra spoke about the benefits of CBD oil, which she came to know during her sister's cancer treatment last year.

Sona shared a note on her verified Facebook page: "The TV stories feel like a farce esp CBD oil and ganja and Whatapp chats being talked about with such fervour. I discovered what the former was when my sister went through multiple surgeries for cancer last year. Was told of how magical the healing and pain alleviating this could be for her recovery. Unfortunately we couldn't find any easily in Mumbai. Cannabis has been the base of all Ayurveda till the British banned it I've learnt, thus taking away most of its efficacy."

Bollywood actress Shraddha Kapoor was recently summoned by the Narcotics Control Bureau as part of the agency's probe into actor Sushant Singh Rajput's death. Shraddha was called in by NCB after her alleged chat with Sushant's former manager Jaya Saha, asking for CBD oil, came to fore.

(The above story first appeared on LatestLY on Sep 29, 2020 09:44 PM IST. For more news and updates on politics, world, sports, entertainment and lifestyle, log on to our website latestly.com).