Janhvi Kapoor On Sara Ali Khan And Ananya Pandey's Debut: I'm Sure They Will Be Magic

While we are excited for Sara Ali Khan and Ananya Pandey's big Bollywood debut, clearly Janhvi Kapoor's excitement has surpassed ours. 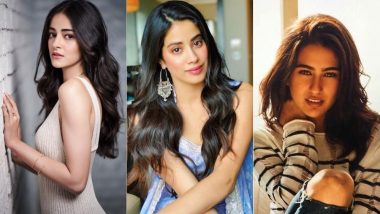 While we are excited for Sara Ali Khan and Ananya Pandey's big Bollywood debut, clearly Janhvi Kapoor's excitement has surpassed ours. The young actress, who recently made her Bollywood debut in Shashank Khaitan's Dhadak with Ishaan Khatter, can't wait to see what her contemporaries have in store for the audience. Saif Ali Khan's daughter Sara Ali Khan is making her big debut with Kedarnath (or Simmba?) this year whereas Ananya Pandey, Chunky Pandey's daughter, is debuting next year along with Tara Sutaria in Student Of The Year 2.

On the same, the actress quoted to DNA, “As an audience member, I’m excited to see Sara, Ananya and Tara. I haven’t interacted with Tara, but I have spoken to Sara and Ananya and they’re so full of life. They are amazing people and I’m excited to see them on screen because I’m sure they will be magic. It’s good to see so much new talent coming into the industry.”

People have speculated the obvious competition that thrives among the star kids who are making their respective debuts at around the same time, Janhvi is not on board with the whole idea of comparisons. She says “I don’t know why everyone is pitting us against each other. I guess people enjoy doing that. Competition is a bad thing if you make it sound that way.”

Janhvi also addressed the underlying sexism in the constant comparisons and stated that she's never heard anyone ask Ishaan the same questions about competition and pitting actor against another actor. Her quote, “It’s also odd because I think you only pit women against each other. Why is no one asking Ishaan the same question — if he’s feeling the sting of competition, too! People love pitting women against each other. But in reality, we can be happy and celebrate each other’s success. It’s easy to co-exist if you are doing a good job.”

Touche! The young actress may have a long way to go with respect to refining her acting chops but she certainly got the sass and wit on-point. More power to you, Janhvi!

(The above story first appeared on LatestLY on Aug 28, 2018 08:48 AM IST. For more news and updates on politics, world, sports, entertainment and lifestyle, log on to our website latestly.com).