I am sure that Kajol has not said it intentionally, perhaps she might be bingeing too much Quentin Tarantino movies recently. 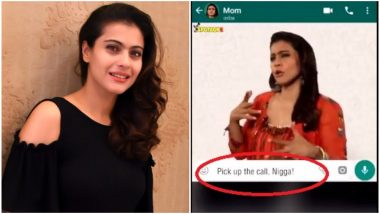 There are some celebs in Bollywood who are known for their muh-phat nature and their aversion for being politically correct, all the time. Like Kajol, Kareena Kapoor Khan and even Kangana Ranaut and Salman Khan. But sometimes they end up with a foot in their mouth, blurting out something they shouldn't have done. Something of that sorts happened with Kajol, when she inadvertently said the N-word, not realising that it is as forbidden as 'He Who Shall Not Be Named'. Whoa! Alia Bhatt is Already Alia Kapoor? Kajol Spills The Beans - Watch Video!

The incident happened when Kajol was promoting her recently released film, Helicopter Eela, for a website, along with her co-star Riddhi Sen. They had done a skit based on WhatsApp conversations that have Kajol trying to bother her son, while trying to sound cool. While using millennial slangs like singing The Kiki song as such, Kajol also accidentally end up saying the N-word. Oops! Helicopter Eela Movie Review: Kajol and Riddhi Sen's Feel-Good Drama Suffers From A Bumpy Narrative!

While the website had the sense to delete the word from Kajol's audio, they failed to take it from the message that was below the video, appearing in the chat box. Check out the video below -

Did Kajol just use the n-word pic.twitter.com/B4ZD3gcTt7

I am sure that Kajol has not said it intentionally, perhaps she might be bingeing too much Quentin Tarantino movies recently. I just hope that someone has now given her a memo of all the words she should not use in a public platform, considering she has such a huge fan-base!

(The above story first appeared on LatestLY on Oct 12, 2018 03:43 PM IST. For more news and updates on politics, world, sports, entertainment and lifestyle, log on to our website latestly.com).