Kajol Birthday: 7 Iconic Performances of The Stunning Actress That Have a Long Way To Go

Kajol has tried different genres and roles throughout her career graph but some of them are simply iconic due to her performances. Here are some of those. 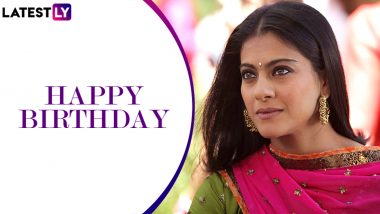 Kajol turns 46! The Bollywood actress has been ruling the industry for more than two decades now. She came into the industry with the 1992 film Bekhudi but set her foot strong only after Shah Rukh Khan starrer Baazigar. Her journey post that has only been inspiring and interesting. She has tried different genres and roles throughout her career graph but some of them are simply iconic due to her performances. Here are some of those. Kajol’s Advice for Upcoming and Emerging Actors Is to Be Original.

DDLJ gifted Kajol one of her most memorable roles, Simran. She wonderfully portrayed the role of a girl who did not think twice before following her heart! Kajol told fans 'jee le apni zindagi' through her role!

What a movie and what a performance! Can we give her some credit to keep us guessing who's the murderer in this thriller?

She plays a double role in this intense story and she killed it in both the roles. It is almost difficult to remember that we are watching the same person in two roles on the screen.

We all know ye Anjali Sharma kaun hai! This character turned out to be one of her most loved characters and still is. Not just her performance but her haircut and her red dupatta became a rage too!

Kajol plays a bubbly Punjabi girl in this movie with a streak of innocence. Her dialogues in the movie are still used in the memes and one cannot help but read it in her voice. Vaddelog, vaddi baatein!

We Are Family (Maya)

She plays the divorcee and cancer patient who is hell bent on giving her kids a happy family. She has wonderfully portrayed the emotions of love, jealousy, insecurity and kindness in equal parts.

My Name Is Khan (Mandira)

She plays the beautiful single mother who juggles with her emotions through out the film. She definitely put a tough act in this role, showing the audience that she is not just that 'bubbly' persona but beyond that.

We cannot really sum up Kajol's vast work in these seven films but we can definitely start from here! We hope that she finds more interesting projects in the year ahead!

(The above story first appeared on LatestLY on Aug 05, 2020 12:01 AM IST. For more news and updates on politics, world, sports, entertainment and lifestyle, log on to our website latestly.com).